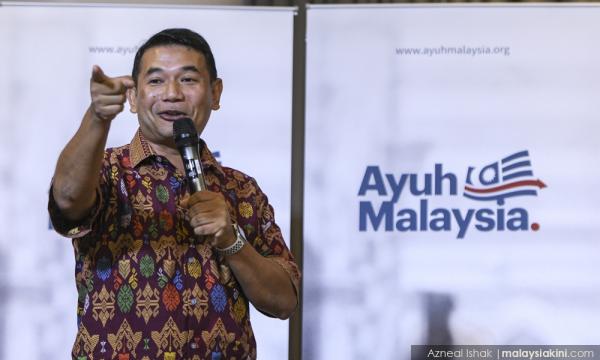 Rafizi: Harapan should aim for 80 seats in GE15 to avoid losing relevance

Daniel: PKR vice-president Rafizi Ramli has analysed it mostly correctly. However, Pakatan Harapan still needs to agree on how to synergise under one banner rather than going it alone.

PKR needs to recognise that they were the biggest liability and in need of urgent solutions - some of which are covered by Rafizi.

DAP, and by extension, Harapan, needs to secure the non-Malay votes by agreeing on a direction that matters most to these communities.

Confidence regarding the previously promised Unified Examination Certificate (UEC), vernacular schools, economic fairness (not the ‘ketuanan’ type) is the launching pad Harapan can rely on.

And DAP needs to promise never to "touch" TAR UC (Tunku Abdul Rahman University College), which many Chinese families regard as a sacred cow, again. The impact was quite immediate, as seen at the Tanjung Piai by-election.

All the top brains within Harapan should be given ministries to shadow now and immediately challenge any missteps by the government - to demonstrate their capabilities whether in government or opposition.

Finally, Harapan needs to understand the "malu apa bossku" mystery - why apparently quite normal people have become so shameless in supporting the former prime minister, and whether these people would actually vote BN.

The Middle Man: The treacherous acts of the Sheraton backdoor traitors and the double talk of a senile egoistic old man put a real damper on Harapan's change agenda.

The continuous bickering on the prime minister transition from Dr Mahathir Mohamad to Anwar Ibrahim was downright childish, boring and ultimately a fart in the face.

And then you have Anwar declaring and hailing his "majority backing" vote for the PM position, which turned out to be a total embarrassment and a heavy dent to his ego and confidence. It's a high possibility he was played out and very ill-advised.

Rafizi rightly pointed out Harapan must get its act together. Work cohesively and honestly to strengthen the bond amongst the partners. They must ensure that any internal dissent and problems are attended to and resolved.

Harapan must act as one, unite as one and be as one. It must set out its common political and policy objectives clearly. Structure a common narrative for all partners to be sent out to voters.

The time has come for real men and women of Harapan to rally and stand up for the "New Malaysian Change Agenda". Voters of GE14 await the second coming of Harapan.

VioletZebra1195: Harapan should aim for just 80 seats (out of 222 seats)? If the political reality is that 80 seats are a good target for Harapan, then it looks like it is time to give up on Malaysia and migrate.

This country cannot afford to suffer another five years of Umno misrule. It is already on its knees. If there is no hope of Harapan retaking the government, people should just flee now before it is too late.

Constitutional Supremacy: Harapan must prepare and vie to win power. If it falls short, it does not matter.

Thus, Rafizi is wrong on this from my point of view. In politics, you do not throw in the towel before you go into battle.

The results of the Malacca and Johor state polls may not be relevant for GE.

Unspin: Rafizi's strategic thinking is the best I have heard from all the Harapan leaders since 2018. It reflects precisely the voting sentiment on the ground, especially among independent voters.

If Anwar was to read this piece, he should stop being Mr Nice Guy and back Rafizi and former party vice-president Nurul Izzah Anwar to revive PKR, which is currently in ICU.

By the way Rafizi, instead of saying 80 seats, a stronger message to get fence-sitters to come out to vote would be "let's deny BN a two-thirds majority in GE15" because if they were to get two-thirds, the consequence would be dire.

The Wakandan: A simple, clear idea from Rafizi. That's the way to go. Don't make a simple thing complicated, which does not improve anything.

At this point in time, it is better to concentrate on the original Harapan coalition rather than the more ambitious big-tent approach. More importantly, they do not bring added value to Harapan but rather, more problems and complications.

Indeed, Harapan can do without the big-tent approach for now. I wished Harapan had taken this step after the Sheraton coup. It would be a good time to consolidate and regroup, not to continue the uncertainty of in-fighting that the big tent brings.

A good point brought up by Rafizi is with regards to the transference of votes, in which if you eliminate the number of parties contesting, the votes will automatically go to you. That assumption is presumptuous as it does not necessarily be that way.

So, it is important that Harapan consolidate its own grassroots voters, not alienate them at the risk of losing them. Others will naturally follow if they see a strong coalition.

Existential Turd: What Rafizi is saying is what many commentators have been writing about all along. But nobody listens. Is anybody going to listen to Rafizi? It is all common sense. But why is common sense so uncommon in politicians?

Another thing worth repeating. We cannot rely on the minority to save Malaysia. The majority has to want it.

Before that, the majority has to be convinced Malaysia doesn't have a bright future if it continues on the well-beaten path.

After that, you have to convince them to support your vision of a new and better Malaysia. Pandering to their fear is not saving Malaysia. It is getting Malaysia deeper into the quicksand of failure.

I Am A Malaysian: As leaders like PKR's Saifuddin Nasution Ismail and Farhash Wafa Salvador have utterly failed to prevent humiliating losses in three state elections, that simply shows they do not yet have the wherewithal to achieve success by themselves whichever way we want to see it.

So, instead of openly blaming and damning their comrade Rafizi for previously deserting PKR when the going was tough, they should now be sensible enough to welcome back Rafizi and work with him, or to be cruelly frank, if need be, they should even subserviently follow behind him as their master strategist to fight the coming back GE15 battle.

The attitude of PKR's leaders like Saifuddin and Farhash in the days ahead will tell us whether they are genuine team players who seek to serve the rakyat's best interests or mere self-serving politicking politicians like those that abound by the dozens in the Malaysian political arena.

There is no way Farhash or Saifuddin, or anyone else in PKR can think or talk like this. Rafizi and DAP leader Tony Pua are great assets to Harapan.