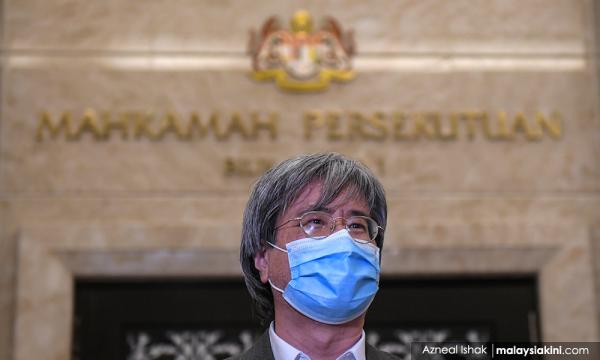 LIVE | The Federal Court has delivered its decision on a contempt of court case against Malaysiakini over its readers' comments.

3.25pm: Thank you for following our live report today.

11.25am: At a press conference following the sentence, Gan says Malaysiakini is very disappointed with the decision.

"The decision flies in the face of the fast-changing new media landscape in this country.

"It will have a tremendous chilling impact on discussions of issues of public interest and it delivers a body blow to our continual campaign to fight corruption, among others."

He says that in an environment where everyone has a megaphone through a vibrant social media is important for us to explain, educate and illuminate.

"I think the decision made against us and the hefty fine that has been put against us is perhaps an attempt to not only punish us but shut us down.

"I am terribly disappointed... What crime has Malaysiakini committed that is so horrendous that we are forced to pay a hefty fine of RM500,000 when there are individuals charged with money laundering and abuse of power involving millions, if not billions of ringgit, walk free?"

The Federal Court metes out the fine during proceedings today.

Court of Appeal president Rohana Yusuf says that Malaysiakini must pay the fine within three days from Monday next week.

The Attorney-General's Chambers earlier had sought for a fine to be set at RM200,000 while Malaysiakini's legal team had sought a maximum RM30,000 fine.

11.05am: The Federal Court comes back from its break to deliver the decision on a penalty against Malaysiakini.

Court takes a break before deciding on penalty

10.22am: The Federal Court bench is taking a short break to deliberate on the penalty to be levied against Malaysiakini.

10.20am: Senior federal counsel Suzana Atan seeks a RM200,000 fine against Malaysiakini due to the failure of the news portal to deal with readers' comments.

However, Malaysiakini's lead counsel Malik Imtiaz Sarwar pleads for a minimum RM20,000 fine and a maximum of RM30,000.

Malik submits that this sum would reflect the displeasure of the court while showing compassion, given that this is the first case of its kind.

10.12am: Malaysiakini CEO Premesh Chandran unreservedly apologises to the Federal Court during open court proceedings before the seven-member panel.

His apology comes during submission on sentencing for Malaysiakini over contempt due to readers’ comments.

Earlier, Malaysiakini's lead counsel Malik Imtiaz Sarwar informed the bench that his client unreservedly apologises for what has transpired.

10.10am: The Federal Court now hears submissions from legal teams for Malaysiakini and the Attorney-General's Chambers on sentencing of the news portal for contempt.

According to her, Malaysiakini and its editor-in-chief Steven Gan had successfully rebutted the presumption under section 114A of the Evidence Act.

Nalini says the evidence pointed to the fact that at the time when the comments were first visible to readers, the respondents were unaware of the existence of the content until it was brought to their attention.

“They have given sworn evidence of this fact and there has been no challenge to this evidence given on oath,” she says.

Public must not use online comments to attack judiciary - Federal Court

9.51am: The Federal Court says the current contempt case against Malaysiakini acts as a reminder for the public not to attack the judiciary using online comments.

Court of Appeal president Rohana Yusuf, who chairs the bench, says that while freedom of speech is protected, it must be within the law.

She says that Malaysians must use discretion when posting comments online as the comments would always remain there.

9.53am: The Federal Court rules that first respondent Malaysiakini is guilty of contempt of court.

Court of Appeal president Rohana Yusuf who presides over the bench says that they do not find second respondent editor-in-chief Steven Gan guilty of contempt.

The decision read out by Rohana is a 6-1 majority decision. Federal Court judge P Nallini gave the dissenting judgment.

Malaysiakini should have been aware of comments - Federal Court

9.45am: The apex panel, in reading out its judgment, says that Malaysiakini should have been aware of the comments posted.

Rohana says that Malaysiakini has an impressive editorial team structure, among others.

She notes that as a result, it is not possible for such a structured system not to have taken notice of the comments.

9.20am: Court of Appeal president Rohana Yusuf, who heads the seven-member bench, begins reading out the majority judgement in the contempt application against Malaysiakini.

9.16am: Proceedings begin with the Federal Court's seven-member panel set to deliver its decision.

9.12am: While waiting for proceedings to begin, Malaysiakini CEO Premesh Chandran is seen in court conferring with lead counsel Malik Intiaz Sarwar.

Lawyers for Malaysiakini say there are three possible outcomes today.

1. Both Malaysiakini and Gan will be found not guilty of contempt.

2. Malaysiakini will be found guilty, but not Gan.

3. Both Malaysiakini and Gan will be found guilty.

8.57am: Media representatives are seen preparing for the coverage in the assembly hall at the Palace of Justice.

The hall is where journalists can follow the proceedings which will be streamed live.

Malaysiakini's lead counsel Malik Imtiaz Sarwar is seen in the courtroom where the decision will be delivered, preparing for the proceedings which are yet to start.

8.16am: Malaysiakini editor-in-chief Steven Gan arrives at the Palace of Justice in Putrajaya.

8am: After several postponements due to the movement control order (MCO), the Federal Court will this morning deliver its decision on a contempt of court bid against Malaysiakini.

As the media spotlight shines on the proceedings at the Palace of Justice, a seven-member panel chaired by Court of Appeal President Rohana Yusuf will decide whether the online news portal has committed contempt via its readers' comments.

Should Malaysiakini and its editor-in-chief Steven Gan be found to be in contempt, sentencing could be handed down on the same day.

There is no legal limit to the penalties for contempt of court. Among the possible outcomes include Malaysiakini being slapped with a fine and/or for Gan to be jailed.

This is the first time Malaysiakini is being cited for contempt of court in its 21-year history.

The move has drawn concern from multiple quarters, among them the Centre for Independent Journalism (CIJ), which said this brings the risk of more instances of media censorship.

Two days later, the Federal Court granted leave to the AG to proceed with the contempt bid.

On July 13 last year, the apex court heard submissions from the legal teams of both parties on the merits of the committal action. It then went on to reserve its judgment.

Support pours in for Malaysiakini, concerns raised over press freedom

COMMENT | Is today the beginning of the real emergency?

Editor's note: Based on legal advice, the commenting feature for the above article has been disabled. The comments may tantamount to sub judice and contempt.