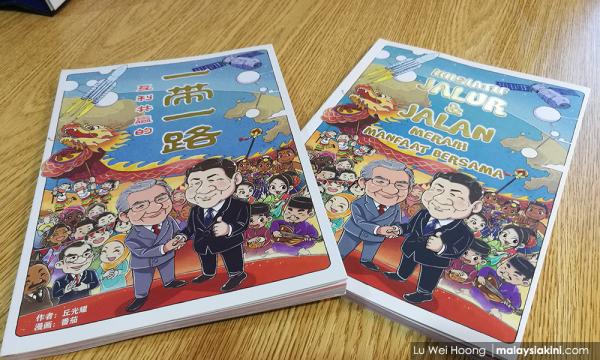 Over 2,800 copies of banned comic book confiscated from schools

Over 2,800 copies of the banned comic book “Belt and Road Initiative (BRI) for Win-Winism” by former DAP activist Hew Kuan Yau have been confiscated from schools, according to Home Affairs Minister Muhyiddin Yassin.

He said both the Home Affairs and Education ministries conducted a simultaneous enforcement operation nationwide soon after the book was banned on Oct 23.

The operation mainly targeted schools which received the comics from Hew, according to Muhyiddin in a parliamentary written reply.

"As of Dec 4, a total of 2,873 comic books were confiscated through the operation," he told Pakatan Harapan’s Isa Ab Hamid.

He said some schools even disposed the books themselves following the ban.

"Apart from schools, the enforcement was also carried out at the printing and publishing premises, and bookstores nationwide to ensure no further activities of printing, publishing, selling, and distribution of the said comic," added Muhyiddin.

He warned that anyone who prints, imports, publishes, circulates or sells the comic book following the ban could face a jail term of up to three years or a fine of up to RM20,000 or both.

On Oct 23, the Home Ministry announced the ban of Hew’s comic book, for, among others, promoting and spreading erroneous facts about communism ideology.

The ban applies to all three versions of the book in Bahasa Malaysia, English and Mandarin.

The controversy first arose when it was revealed that the Malay version of the book, created by Hew and published by the Penang-based Asia Comic Cultural Museum where he was the curator, had been sent to libraries in national and vernacular secondary schools for free.

The Education Ministry has repeatedly denied authorising the distribution of the books to schools and is investigating the matter.

Hew, known by the moniker “Superman”, said the book was intended to encourage school-going children to learn more about the BRI by China. Aside from the BRI, the publication also touched on hot button issues such as the Uyghur Muslims in China.

He had further claimed a copy had been presented to top Chinese leaders, including China president Xi Jinping, by Prime Minister Dr Mahathir Mohamad in April this year.

The Prime Minister’s Office, however, denied having any role in the presentation of the book to Xi.