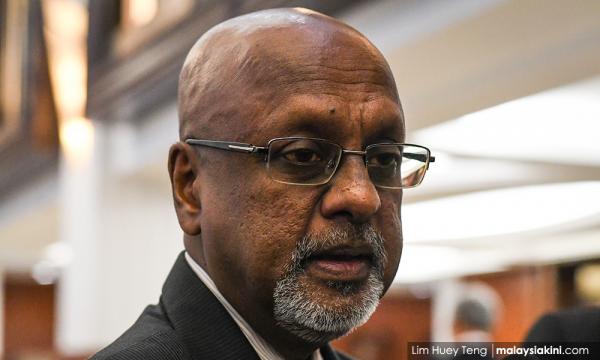 Rekindling the allegation of a deep state undermining the Pakatan Harapan government, a deputy minister claimed the decision to charge the 12 for attempting to revive the Liberation Tigers of Tamil Eelam (LTTE) was made when Atttorney-General Tommy Thomas was abroad.

“The deep state exists in more than one institution. The AG was on holiday for two weeks. This is what I mean. Sometimes there is only so much one person can do.

“If the authority to prosecute is already signed, it is hard to retract because there is backlash. So, you need to stop it before it happens. So you see the deep state is multi-layered,” Sivarasa Rasiah told The Malaysian Insight.

Among those charged were two DAP assemblypersons G Saminathan and P Gunasekaran.

Contacted by Malaysiakini later, Thomas declined to comment on the latest allegation.

Earlier this month, the AG had stepped in when the prosecution attempted to slap additional charges against Gunasekaran. Following this, the charges were withdrawn.

However, Thomas later clarified that Gunasekaran was still facing charges, which could land him in prison for the rest of his life if convicted and therefore saw no need for an “overkill”.

Sivarasa: Cabinet did not endorse arrests

Meanwhile, Sivarasa said the arrests under the Security Offences (Special Measures) Act 2012 (Sosma) were not endorsed by the cabinet or senior ministers.

He said certain elements in the police, who were part of the deep state, had presented the arrests as a fait accompli.

The PKR lawmaker also acknowledged that the LTTE dragnet infuriated those who supported the coalition in the last general election, especially since Harapan promised to repeal the draconian components of the security law.

After the arrests, Prime Minister Dr Mahathir Mohamad said he was satisfied with the police's explanation on the matter.

Allegations of deep state posing hurdles to Harapan's reform agenda first surfaced in August last year when the government reversed its decision to ratify the Rome Statute of the International Criminal Court.

Foreign Minister Saifuddin Abdullah had said the reversal was due to fear of a coup d’etat attempt spurred on by powers behind the scenes.

He said history had shown that a coup d’etat is a common reaction to democratic advancement and the public rising up following an election, and it is usually instigated by the “deep state.”

DAP lawmaker Charles Santiago, who has been a vocal critic of the LTTE arrests, previously expressed concern that even if the 12 are acquitted, they might remain incarcerated until their appeals are heard.

“Bukit Aman's counter-terrorism division principal assistant director Ayob Khan Mydin Pitchay even said financial transactions were detected in the accounts of the individuals detained, to enable the resuscitation of the LTTE.

“But these men were subsequently charged for committing various offences related to sympathising with the LTTE between 2014 and this year.

“And there is absolute silence about the alleged movement of money. If anything, they were charged for having paraphernalia in their homes and video footage on their phone,” he added.

Malaysiakini has contacted Ayob for comment on Sivarasa's allegation.