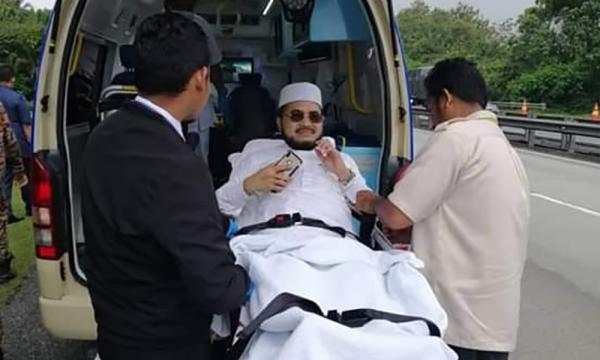 Pasir Puteh MP Nik Muhammad Zawawi Salleh broke his right ankle after being involved in an accident at KM350 of the southbound North-South Expressway, near Tapah, today.

Tapah district police chief Wan Azharuddin Wan Ismail said in the incident at about 1.30pm, the Mercedes Benz car is believed to have skidded and gone out of control before crashing into a metal road barrier.

He said there were two people in the car, the MP and another man driving the vehicle, known as Mohamad Zuraihan Abdul Wahad, 28, who escaped unhurt.

However, Nik Muhammad, 52, who was in the passenger seat, was taken to Slim River Hospital for further treatment.

Wan Azharuddin said it was understood that Nik Muhammad, who is also PAS Dewan Ulama chief, was on his way from Perlis to the Parliament, in the capital.

“The vehicle involved in the accident was taken to the Tapah district police headquarters for inspection by the computerised vehicle inspection centre (Puspakom) and the case is classified under Section 43 of the Road Transport Act 1987," he said.