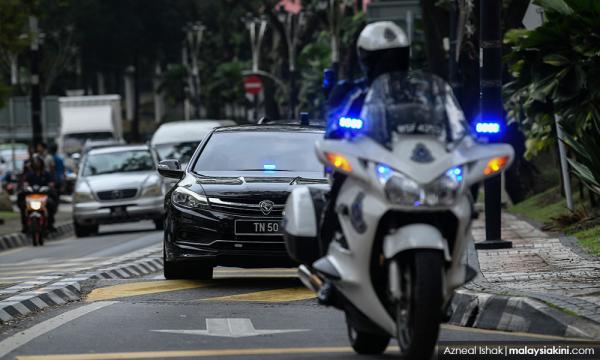 The police will no longer be assigning motorcycle outriders for former prime minister Najib Abdul Razak.

This is according to a letter from the Bukit Aman police headquarters to Najib's special officer Mohd Shahrir Mohd Aripin, which was shared by Najib's former officer Isham Jalil.

Azisman explained that Najib could still request for outriders but only if he was on official business.

"But not for personal or political reasons," Azisman told Malaysiakini.

Earlier today, Isham wrote on his Facebook page that the order was to take effect immediately adding no reason was given for the withdrawal.

"If you are Najib's supporters, please give way to his vehicle to allow him to serve the public and campaign for BN to ensure check-and-balance," wrote Isham.

In 2016, Mahathir, then campaigning against Najib, had his outrider privileges removed as well.

The following year, the police had recalled some of Mahathir's government-assigned bodyguards as well.