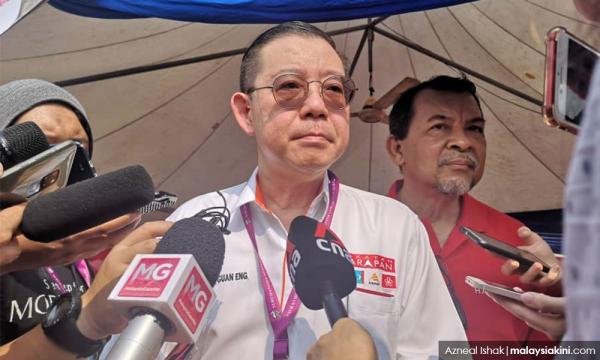 Finance Minister Lim Guan Eng today said claims that he is a puppet of Prime Minister Dr Mahathir Mohamad is a false narrative, which he expects will be used to the Tanjung Piai by-election.

Lim (above) noted the narrative is being peddled based on reports that several entities, including Khazanah Nasional Berhad, formerly under the Finance Ministry, were moved to the Prime Minister's Department.

"Unfortunately, the press reports do not disclose that there are also agencies that are also newly transferred into the Finance Ministry, such as the Malaysian Health Tourism Council that oversees all private hospitals, and the Economic Development Corridors.

"The only major difference is the transfer of Khazanah to the Prime Minister’s Department, especially when Khazanah has always been chaired by the prime minister, even under BN," he said in a statement.

Lim said Khazanah was founded by Mahathir and the prime minister had wanted to be in charge of it.

"Following the decision by Pakatan Harapan that the position of the prime minister and finance minister must be separated to prevent abuse of power and ensure checks and balance, Mahathir had agreed and I was appointed as the finance minister.

"However, Mahathir wanted to take charge and play a more pro-active role in Khazanah, because its role was established by him when he first became prime minister in 1982.

Lim said the "puppet" narrative was not new and on other occasions, the DAP was instead painted as a puppetmaster of Mahathir.

He also accused former prime minister Najib Abdul Razak of spreading "lies" by claiming that he had threatened not to pay civil servants' salary if they did not vote for Harapan.

This is over Lim's statement in Tanjung Piai yesterday where he said voters should not decide in the by-election based on ethnicity, but based on performance and ability to pay civil servants' salaries.

"Clearly the opposition is seeking to win by lies and falsehoods.

"Instead, I had urged the voters to reject politics of racism and religious extremism by the opposition and focus on which political party can deliver better services, better policies and better benefits to the people.

"I pointed out that Harapan is superior to the opposition in fighting corruption, and competent economic management," he said.

In contrast, Lim said PAS, which is backing BN's candidate in the by-election, has struggled to pay Kelantan civil servants' salaries.

"Let us unite together, not only to defeat the lies of the opposition and their racist and religious extremism, but also the dangers of the 'deep state' as exposed by Harapan secretary-general Saifuddin Abdullah," he added.

Lim said a BN victory in the Tanjung Piai by-election would be an endorsement of Umno's and PAS' "racist and extremist religious philosophy".

Voters will go to the polls in Tanjung Piai on Nov 16.

He passed away from a heart attack in September, triggering the by-election.