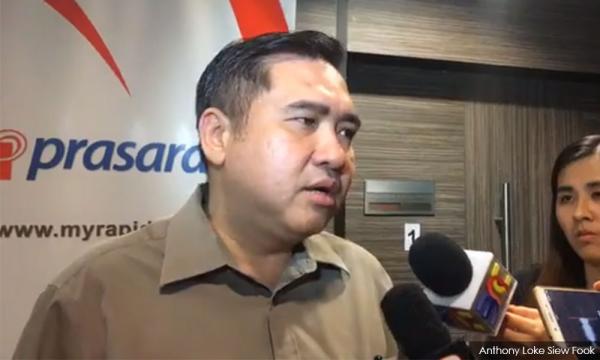 The Transport Ministry has allocated a gross development value (GDV) of up to RM5 billion for the Ipoh Train Station Integrated Development project, which was launched at the train station in the Perak capital yesterday.

Transport Minister Anthony Loke Siew Fook said the development project would be carried out in stages, taking about 10 to 15 years to be fully completed.

He said the integrated development, arising from a Memorandum of Understanding between Railway Assets Corporation (RAC) and Menteri Besar Incorporated, will turn Ipoh into a transportation hub and mixed development for the area around the station.

Besides transportation, it will also involve commercial and housing development, especially of affordable homes.

“Three months after we signed the agreement, we have been able to launch it today. Of course, we want it to be fast,” Loke said after attending the launch of the Electric Train Services 2 (ETS2) and integrated development at the Ipoh railway station yesterday.

Elaborating further, Loke said the cooperation of the state government and local authorities for approval and to ensure the project goes smoothly were needed to realise the integrated development.

“What is important is we want this station to be developed and become a centre of attention for the public,” he said.

Asked if the development plan will be extended to other states, Loke said there was potential for all Keretapi Tanah Melayu (KTM) routes.

“We will see, because all have potential, from Johor Bahru until Perlis. In the East Coast, there is the East Coast Rail Link (ECRL),” he said.

Earlier, in his speech, Loke said the development plan involved an area of 27.5 hectares to create a district with planned development for the areas around the station and rail network.

He added that affordable homes would be built for the people on 16 percent of the land area.

Perak Menteri Besar Ahmad Faizal Azumu in his speech said the agreement between MB Inc and the Transport Ministry through the RAC was very meaningful to Perak in realising the Ipoh Railway Station project as a high-value mixed development hub which had been delayed for more than 15 years.

Ahmad Faizal said several units of Rumah Perakku homes, as well as medium-cost and luxury apartments, would be built in the areas around the Ipoh railway station.

Ahmad Faizal added that commercial space provided in the project would also provide business and employment opportunities to the local residents.

“It is estimated that about 8,500 jobs would be created in the development area,” he said.