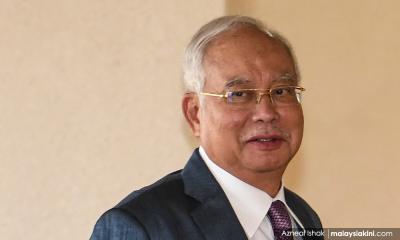 Prime Minister Dr Mahathir Mohamad has been urged not to be one-sided in taking action against Pakatan Harapan members who believe the party will lose future elections, said former premier Najib Abdul Razak.

Najib said if anyone is to be punished first, it should be DAP veteran Lim Kit Siang.

"Kit Siang has an evil mouth, he deserved to be punished even from before," he posted on Facebook last night.

Najib was responding to Mahathir, who said Bersatu would take action against those who tarnish the party by saying that Harapan could lose in a snap election.

While no names were mentioned, this was believed to be aimed at Bersatu's policy and strategy bureau head Rais Hussin.

Najib said he pitied Rais, and claimed that many other Harapan leaders have also said the same or agreed with this notion.

He claimed the DAP veteran was the first to have said Harapan would lose future polls.

Kit Siang, in a statement yesterday, did not say explicitly that Harapan would lose in a snap election.

However, he said that he himself would lose his Iskandar Puteri seat, while DAP would lose 30 to 40 percent of its votes due to misperception and misunderstanding among long time supporters.

Meanwhile, Guan Eng had reportedly acknowledged Harapan's popularity was in decline, but was optimistic that the coalition could turn things around.

Charles and Wong, however, both agreed with Rais' assessment.

Rais had told a forum on Wednesday that Harapan would lose in snap polls due to public unhappiness over issues such as unemployment, cost of living, and skewed priorities that affect Malay-Muslim voters.