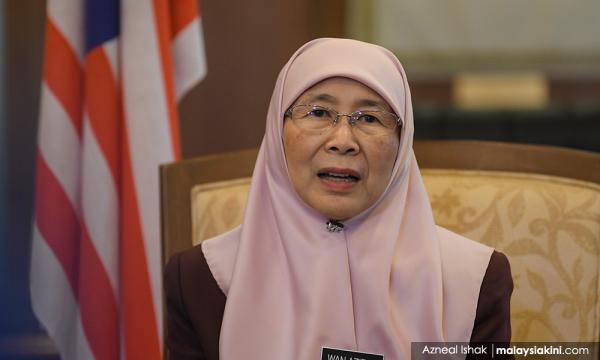 Go to the cops with your info, Wan Azizah tells Azmin, Amirudin

Economic Affairs Minister Mohamed Azmin Ali and Selangor Menteri Besar Amirudin Shari have been advised to take whatever information they have about the sex video scandal to the police.

Pakatan Harapan president Dr Wan Azizah Wan Ismail said this following recent statements from both that indicate they knew who the person behind the videos was.

“It's best if he (Azmin) and the Selangor menteri besar cooperate with the police.

“This is because they seem to have information that could help with investigations into the case,” Wan Azizah was quoted as saying in an Utusan Online report last night.

Azmin previously said that he knew the identity of the mastermind behind the circulation of several sex videos allegedly implicating him, and further suspected those within PKR were involved.

Amirudin, an ally of the minister, went on to claim that the mastermind was someone who had suffered a similar “dark period” and had based their political struggle on this period.

Azmin: It’s not my responsibility

Meanwhile, Malay Mail reported Azmin (photo) as saying that it was not on him to supply the authorities with information.

“We will leave this matter to the police. Reports based on the initial investigation reveal that there are a lot of ‘invisible individuals’ involved in launching this slanderous attack.

“So we will let the authorities investigate. I don’t have the responsibility to expose the person,” the PKR deputy president was quoted as saying last night.

Then-Santubong PKR Youth chief Haziq Abdullah Abdul Aziz later confessed to being one of the men in the video, and named Azmin as the other. Haziq has since been sacked.

Azmin denied this and characterised the videos as a nefarious plot to destroy his political career.

The police are investigating the case, and have since arrested several people – including Haziq, an unnamed PKR assemblyperson and Perak PKR chief Farhash Wafa Salvador Rizal Mubarak – to assist in their probe.

Inspector-General of Police Abdul Hamid Bador said last week that the videos are believed to be authentic, but that the facial recognition software used failed to ascertain the identities of those involved.

Hamid also revealed that a leader of a political party was behind the videos, and that “hundreds of thousands of ringgit” had been spent to produce them.

I will not be made use of, Dr M says of sex video scandal