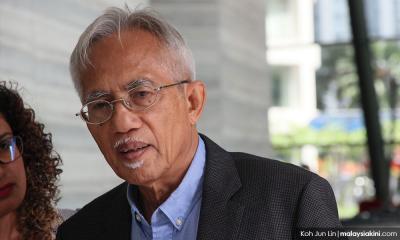 Kadir Jasin taken to task after calling for action against academic

Although Gerak termed an article in Umno Online from Universiti Kebangsaan Malaysia lecturer Abdul Muein Abadi as "pseudo-academic," it also criticised Kadir for his "diatribe" in response.

"Muein, who is currently working on his PhD in Leiden, South Holland, had incurred Kadir’s wrath by writing an article which asserted that the Pakatan Harapan government had sold RM20 billion in assets since winning the 14th general election," the group said in a statement today.

"It is a rather shaky article that has 40 points, accompanied by links and very little discussion or analysis. It’s the kind of sensationalist, pseudo-academic piece that throws a few reports together, without context or explanation."

However, Gerak believes that Kadir's response to Muein's article is a blow to academic freedom.

"(Kadir) started hurling accusations of a conspiracy by the oft-mentioned, but seldom analysed, 'deep state'.

"In his diatribe, Kadir lumped together Muein with the UKM vice-chancellor and the chair of the board of directors, as possible deep state conspirators. And he then asserted that the Education Minister, Maszlee Malik, was being taken for a ride by these evildoers," it said.

"Academic freedom and responsibility mean seeking truths and verifying them. And often the truth need not necessarily be our truth and will hurt.

"But differences of opinion and dissent are part and parcel of academia, of knowledge acquisition and generation."

To illustrate this, Gerak cited the "substandard work" on the Rome Statute of the International Criminal Court by four academicians from International Islamic University, Universiti Teknologi Mara and Universiti Sains Islam Malaysia.

The paper was alleged to have been used to convince the Conference of Rulers to reject the UN treaty.

"It was systematically and comprehensively critiqued and dismissed by real experts, but none of us asked for them to be disciplined or even sacked.

"No one asked the Education Ministry and minister to interfere and punish them," it said.

"Kadir may be the prime minister's media and communications adviser. But as far as academia is concerned, he must not be our censor," the statement read.

"What he is implying the education minister must do also is political interference. This is not – and must not be – the way of the 'New Malaysia'.

"Gerak consistently rejects political interference in academia. Such interference is one of the major reasons why Malaysian academia is in the sad state it is in."