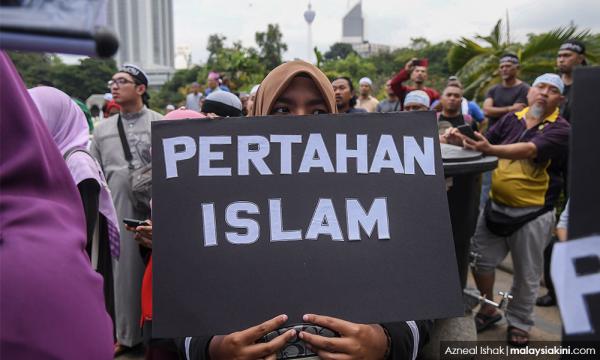 Political analyst James Chin has outlined several key challenges for the Pakatan Harapan government with regard to the coalition remaining in power beyond a single term.

In a paper penned for Australian think-tank Lowy Institute, he noted that in the last general election, the majority of Malaysian voters cast their ballots for a substantial break from the past, as well as meaningful political reform.

“If that process is stalled, Harapan may well be a one-term government

“As the country heads towards the first anniversary of regime change in May 2019, it is becoming increasingly important for the Harapan administration to deal urgently with these challenges.

“Failure to address them is not just politically reckless, more importantly, it retards the process of reform on a range of issues that were promised in the 2018 election,” he said.

According to Chin, who is University of Tasmania's director of the Asia Institute, the Harapan government must deal with the Malay agenda/bumiputera policy, the 1963 Malaysia Agreement (MA63), political Islam and a clear timetable for the transition of power in the next 12 months.

“These issues are not only crucial to the stability of the administration, but also for long-term institutional reforms. The first three issues are not new - they went on unresolved under the previous regime, leading to an increasingly dysfunctional political system and culminating in the change of government.

“The government has an opportunity to change Malaysia's political trajectory if it takes steps to resolve these issues,” he added.

Chin (photo) said the more immediate issue at the highest level of government is the promised transition of power from Prime Minister Dr Mahathir Mohamad to Anwar Ibrahim.

If this is not handled properly, the academic warned, Malaysia could revert to the old regime after the next national polls, which is due in 2023.

On the issue of the Malay agenda, Chin focused on the New Economic Policy (NEP), crafted in the aftermath of the 1969 racial riots. The policy had two aims – eradication of poverty irrespective of race, and the restructuring of society to eliminate the identification of race with economic function.

In 1970, he said the Malays comprised nearly 50 percent of the population and held less than three percent of the country's wealth. This inequity rendered the Malaysian society inherently unstable since the largest ethnic group held an insignificant share of the economy.

Chin said the NEP, into which billions have been pumped since its introduction in 1971, sought to give the Malay community a minimum of 30 percent share across all economic and social spheres and ensure that the Malay community was represented in all occupation groups.

“Using political pressure to extract further government contracts, they infected the political system in the broad. Powerbrokers in government accessed vast wealth to maintain their positions via proxies in the business sector.

“In turn, these business people collected 'rent' on behalf of their political sponsors in private, while publicly claiming to be acting in the interests of the bumiputra community and the BCIC (Bumiputera Commercial and Industrial Community),” he added.

Chin said the implementation of the NEP and creation of the BCIC gave rise to a sense of deep resentment among the non-Malays, in particular, the Chinese and Indian minorities.

“The non-Malay communities were especially resentful that their children were denied the right to university education and business opportunities. It led to unnecessary ethnic tensions,” he added.

The academic argued that if the government had opted for a needs-based instead of a race-based affirmative programme, the Malay community would have still benefitted since it constituted the single largest bloc among the lowest socio-economic group.

“By using racial criteria, Umno created an artificial ethnic barrier for political reasons but the price the country paid was a permanent breakdown in inter-ethnic relations among Malays and non-Malays, making national unity impossible,” he added.

The expansion of the BCIC, Chin noted, created another divide between the races.

He said the BCIC produced an elite layer of politically-connected Malay business people who depended solely on government contracts to survive.

This group, he pointed out, argued that Malay businesses needed special government protection and expansion of the bumiputra-only contracts in order to realise the Malay agenda.

“If the government were to pursue a competitive, free-market approach, this group argued, predatory Chinese businesses would seek to monopolise the Malaysian economy,” he added.

The Harapan administration had acknowledged that the Malay agenda must be reformed and this was also endorsed by the Council of Eminent Persons (CEP).

However, Chin said Harapan's fear of losing Malay votes has placed hurdles with regard to this move.

“Having garnered only about a quarter of the Malay votes in GE14, the Mahathir government recently announced that the Malay agenda will continue with some changes. He has not offered specifics.

“In all probability, there is no political appetite to make real changes to the Malay agenda until Harapan has won the Malay vote at the next general election.

“The overriding fear is that if changes are made now, Harapan will lose Malay support and may even lose government at the next election,” he added.

Since it is a highly emotive issue for the Malay community and the affirmative action policies have existed for a half century, Chin conceded that reforms cannot be made peremptorily.

“Other countries and their governments have faced similar problems when trying to restructure affirmative action programmes.

“Nevertheless, the key warning from such experiences is clear: if no reforms take place, there may be a rapid expansion of the affirmative action policies, far beyond what was originally envisaged," he added.

As for political Islam, Chin pointed out that the question of the religion's role in Malaysian politics is not new and cited how a breakaway group of Muslim clerics established PAS in 1951.

In the 2000s, he said more groups emerged calling for the creation of an Islamic state and the most extreme of them wanted to strip non-Muslims in Malaysia of their political rights, reducing them to the status of dhimmi — a protected minority with restricted rights.

“There is nothing accidental about the rise of political Islam in Malaysia, which came about primarily through three factors. The first derived from the fierce political competition between Umno and PAS for the Malay vote.

“The two parties found Islam to be the most effective political tool to get electoral support and mobilise the Malay polity — the 'Malay vote' became the 'Islamic vote'.

“Both sides vied to be the most 'Islamic', creating more hard-line positions on Islam, despite Malaysia’s multi-racial and multi-religious society,” he added.

The second factor, according to Chin, was Umno's bureaucratisation of Islam.

“To demonstrate its true championship of Islam, Umno's Mahathir established the Malaysian Islamic Development Department (Jakim) within the Prime Minister's office. A key consequence of Jakim was a gradual revolution in the teaching of Islamic theology in government schools.

“That teaching espouses a theology derived from the Middle East, particularly Saudi Arabia. Rather than teaching inclusiveness and tolerance of other faiths, this Saudi Arabia-centric curriculum promotes an exclusivist view of Islam, Islamic supremacist attitudes, disdain for Islamic theologians who disagree with this doctrine, contempt for minorities, and hatred for Islamic groups such as the Shias,” he added.

Chin said the third factor followed the Iranian Revolution in 1979 where Malaysia, like the rest of the Islamic world, underwent a revival of Islam.

“Saudi Arabia tapped into this global interest by giving money to numerous institutions and charities in the developing Muslim world and generous scholarships for thousands of Muslim students to study in Saudi Arabia.

“Its aim was to counter Iran and promote ultraconservative Islam — Wahhabism and/or Salafism.

"Thousands of young Malaysians went to Saudi Arabia and other parts of the Middle East to study Wahhabism/Salafism and its intolerant and exclusivist way of thinking.

"A sizeable number became religious teachers or ustaz, established their own tahfiz schools and propagated their ideas to young Malaysian Muslims inside Malaysia,” he added.

Chin said the combination of the abovementioned factors had produced a brand of intolerant Islam that promoted the narrative of Muslims vs non-Muslims in Malaysia over the past three decades.

“The non-Muslim population, especially the Christian community in Malaysia, feel they are under siege by Islamists who are suspicious of anything they deem to be Christian,” he added.

On that note, Chin said the question of political Islam is perhaps the hardest to deal with in policy terms and there is the absence of successful examples elsewhere.

“What is really needed in the 'new' Malaysia is a complete mindset change when it comes to the position of Islam and the politicisation of Islam.

“The current practice (in which Jakim and other government Islamic bodies refuse to get involved in inter-faith issues, on the basis that Islam is constitutionally 'higher' than other religions, is not sustainable and inflames religious tensions between Islam and other faiths.

“Giving the non-Islamic faiths an official platform, such as a dedicated ministry, would provide a forum for rational discussion of inter-faith issues,” he added.

Chin admitted that in the immediate aftermath of a momentous regime change, implementing a wholesale political reform agenda is challenging.

However, he argued that modest changes are achievable.

“They would lay the foundation for much deeper reforms in the future years of the administration.

“More importantly, they would establish the new government's credibility as a 'change and reform' government, living up to the expectations of voters,” he said.