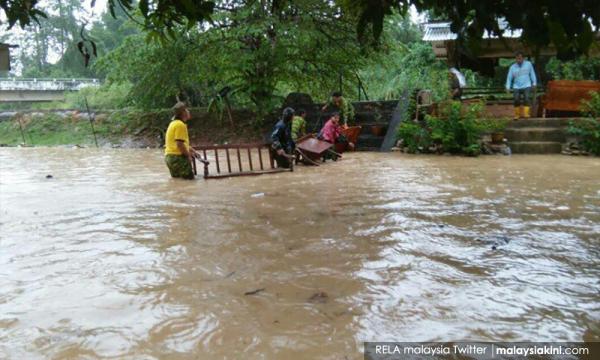 The floods which struck several villages in the Manjung district in Beruas, Perak have been described by locals as the worst in recent history.

Faizal Mohd Radzi, 32, a resident of Kampung Semangat, Segari, near Beruas, said this was the worst experience he had since moving to the village five years ago as his family had to evacuate from the house.

"I was shocked to see that the floodwaters outside our house had reached chest-level, and I had to carry my eight-year-old nephew to get to the relief centre.

"We did not expect the floods to be this bad. I pity my nephew who had come to the village to spend his school holidays and had to endure the floods," he said when met by reporters at a flood relief centre at the BN Back Bencher’s Club Hall in Batu 4, Segari.

Faizal was among 709 victims from 158 families in Manjung who were evacuated to six relief centres in Lumut and Pantai Remis following floods in several areas in the district.

Another resident, Muhamad Khairul Azmi, 21, who works as a security guard at a school, said he had returned home from work to help his family after finding out that his house was flooded.

He said the situation was made worse as water flowing down from a hill during heavy rain caused the house to be tainted with muddy water.

Over 14k evacuees in Kelantan

Meanwhile, more people have been moved out of their homes in flood-hit Kelantan, raising the number of evacuees to 14,237 as at 8am compared to 13,873 at 9pm yesterday.

The infobanjir application of the Social Welfare Department reported that all the evacuees, from 5,561 families, were being accommodated at 63 relief centres in six districts, namely Kota Bharu, Pasir Mas, Tumpat, Tanah Merah, Pasir Puteh and Gua Musang.

Gua Musang became the latest district to be hit by the floods, and has 142 people from 32 families at two relief centres that were opened last night.

The infobanjir.water.gov.my portal of the Drainage and Irrigation Department reported that the level of Sungai Golok at Rantau Panjang, Pasir Mas, had dropped to 10.29 metres at 8am from 10.34 metres at 8pm yesterday, but remained above the danger point of nine metres.

The level of Sungai Golok at Kuala Jambu, Tumpat, remained at 3.71 metres, yet above the warning point of 2.50 metres.

The ebanjir.kelantan.gov.my portal reported that rain, at times heavy, was experienced in several places in the state.

While in flood-hit Terengganu, the situation has improved tremendously, leaving only 49 people from 12 families at two relief centres in the Setiu and Besut districts this morning.

Nevertheless, heavy rain overnight had raised the levels of some rivers.