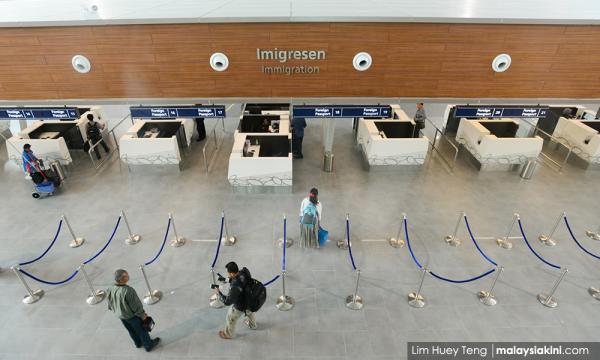 Vijay47: I know from personal experience that Home Affairs Minister Hamzah Zainuddin and the Immigration director-general (DG) are not representative of Immigration services.

Although I usually use the auto-gate for departure and return, I have always received the most pleasant of assistance from Immigration officers at the airport.

In fact, from nearly all government offices I may need to visit.

We now hear two stories, one allegedly of arrogance and bullying by the head of the Public Services Department (PSD) and the other, dereliction of duty by the airport staff. Who is Cain, who is Abel?

On a purely emotional basis, the public will stand by the allegations made by the Immigration Services Union of Peninsular Malaysia.

For far too many occasions have we come across instances of even petty government servants conducting themselves as heavenly beings demanding they be served hand and foot.

Just to give examples from opposing ends of the spectrum – the punk son of a MP being given outrider escort, and the police officer executing the now famous kissing of ‘the hand that stole’.

Back to the stories. PSD says its DG Mohd Shafiq Abdullah did not have his passport checked. I find this impossible to believe. Did the airport staff actually wave him through the gates? Or did he cross by using the auto-gate? If the latter, why should anyone check his passport?

My take is that Mohd Shafiq was already seething that he was not accorded the VIP room treatment with kompang group to welcome him. And boy, was he looking for a head to chop!

Which brings me to the next point. Who are those entitled to VIP treatment and motorcycle outriders? Every Little Napoleon and convicted felon?

The sheer fact the union released a public complaint immediately is telling in itself. The conduct of Mohd Shafiq must have been so offensive that the union felt compelled to protest at once.

In a land where the required protocol is to bend low and kiss feet, would a union dare complain against a senior government official?

This issue demands contrition and retribution. But we know that what would result will be the usual “It was all a misunderstanding. The PSD DG was merely giving some fatherly advice”.

Tembikai: Knowing Mohd Shafiq, he is a stickler for rules and procedures. He cannot tolerate nonsense and lackadaisical attitude.

Most probably, there are people in the civil service who want to get rid of him to make their lives easier.

If the cabinet and the government have any brains, they should stick to Mohd Shafiq and even promote him to chief secretary.

Anon25: Given these two versions of this incident, I tend to believe the union's version. But with modifications.

Union president Khairil Niza Khairuddin, a serving government officer, would not have made this public statement unless the immigration officers felt they were unfairly abused by accompanying junior officers, if not by the boss himself.

But there could be a serious misunderstanding. The head of PSD is a very senior government officer. He deserves some recognition and priority treatment, especially since his departure must have been notified to several agencies that control the airport, as is usually done when VIPs travel. There should have been an immigration officer waiting for his rombongan (entourage) in the VIP area.

The best thing to do I think is for Khiril and the Immigration officer to quietly apologise to Mohd Shafiq.

Malaya: Who is lying? The CCTV footage will show a very clear picture of this incident. Unless that is, someone destroys the footage.

Even if there is an error in the immigration process or procedure, Mohd Shafiq should use proper discipline channels and not humiliate the officers in public.

By humiliating the officer, it clearly showed he is not fit to be in this leadership position.

BobbyO: Whatever the solution reached, it has left a mark on the DG. His relationship with the other departments or civil service will no longer be the same again.

Whatever the situation in the VIP room, it should have been settled more amicably by the DG, instead of throwing his weight around.

Now he has left a bitter taste in the mouth of not only the Immigration office but even other senior government officers who may have a different opinion of him.

WhiteHornet2439: This is a typical Malaysian malady. When a top official is caught in a farce, they always try to turn the table and shift the blame onto the other party. Don't be surprised if suddenly the CCTV footage becomes unavailable due to technical issues.

Don't forget, there are many instances of persons making police reports against the establishment being investigated by the police instead of investigating the well-connected party against whom the report was made.

In most parts of the world, when something goes wrong, the highest-ranking person takes the blame. In Malaysia, they go to a great extent to see how the blame can be pinned on the lowest-ranking official involved.

MS: I’ll wait for the alleged video to go viral before I aim my slingshot.

In the meantime, I must say it is deliciously satisfying to see the leading lights of the ‘ketuanan’ services have a go at each other.

For a change, it does not involve the ‘Lain lain’ and their Bon Odori gatherings, their Timah or their Oktoberfest revelry on the receiving end of ‘ketuanan’ wrath.