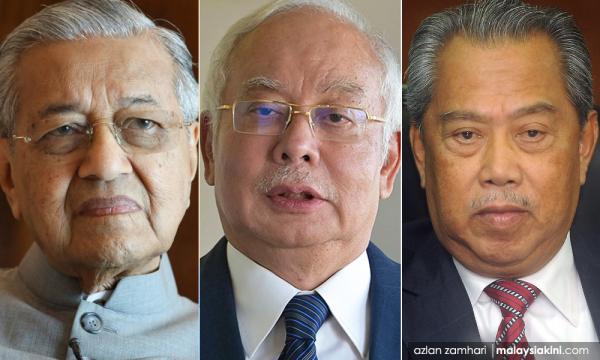 YOURSAY | ‘Why do ‘protectors’ steal and waste billions?’

BobbyO: Bersatu Youth chief Wan Ahmad Fayhsal Wan Ahmad Kamal, ask yourself with a sincere heart if you or any of the Malay parties had truly played the part of the protector.

How many Malays today, after 60-over years of the “protector’s” rule, are living in poverty? How many Malays remain illiterate or even with their education credentials cannot earn a decent income?

How many of the Malays still rely on the “crutches” and help given by the government after 60 years of Malay-majority rule? The list goes on.

The Malays have been misled into believing they are being protected by the elites, politicians and even top civil servants. They are thrown crumbs, while those at the top sweep up the best for themselves and their families.

How long will you politicians keep making use of them? How long before they wake up and realise they have been taken for a ride?

Proarte: The burning question is why do the “protectors” make it a habit to steal or waste billions amounting to trillions, especially over the last 40 years, through crony economic policies and deliberately undermine fundamentally important institutions such as the judiciary, police force, media and the education system?

The “protectors” in this case can be described by the Malay proverb “Harapkan pagar, pagar makan padi”.

Malays are not mentally deficient or maimed people, though the “protectors” want to regard them as such so they can steal in their name and enjoy obscenely affluent lifestyles.

These “protectors” have no desire to uplift the Malays, but instead, need them to be a mentally shackled and economically-dependent community in order for those in power to steal from the nation under the bogus pretext of uplifting the Malays.

We could have learned from Singapore, which was part of Malaysia before it was ejected unceremoniously, for wanting to operate a system of governance based on meritocracy.

Not long after becoming independent from Malaysia, Singapore followed a trajectory of zero tolerance for corruption and, after almost 60 years, has developed into one of the richest and most educated countries in the world.

The fact is the “protectors” of the Malays are modern-day pirates and the woes of our nation are due to their piratical practices.

They have no idea how to develop our multiracial and multireligious nation with tremendous human and natural resources. They only know how to steal and are very adept at that.

Straight Citizen: It's citizens like Wan Ahmad Fayhsal who continue to confirm to the rakyat that the cancer of our education system, through the years in indoctrinating and dividing Malaysians with their not-so-subtle rhetoric that “Malaysia is for Malays” has truly succeeded.

We continue to be plagued and divided as a nation by irresponsible, self-serving politicians who will readily exploit any weak nerve or negative sentiment in our human fibre to achieve their quest for money, fame and power.

Yes, we Indians, Serani, Chinese, and the like get your point, Wan Ahmad Fayhsal. According to you, we are deemed second-class citizens or ‘pendatang’ (immigrants), who have no place in this land although we love our Malaysia, would readily defend its people, and still proudly call this our home.

I truly believe Wan Ahmad Fayhsal’s toxic voice represents many who hold highly their tribal mentality. To our horror, it is growing and the hatred continues to build. God save Malaysia.

Catmandoo: @Straight Citizen, isn't Wan Ahmad Fayhsal just stating the status quo? Malays are the majority. If the majority of Malays wish to vote to entrench their position within the system, is that not natural?

Sure, the rest of the races lose out - and Malaysia as a whole - but does it really matter for the majority of Malays? It takes a tremendously enlightened - or foolish - Malay to remove himself or herself from a position of privilege.

Undecided: @Catmandoo, you are right except for your point that it does not really matter to the majority of Malays. This is because it is unsustainable for the non-Malays to support Malay privileges forever as the non-Malay population will be decreasing over time.

This ‘tongkat’ (walking stick) mentality does not help to prepare Malays as a “race” to face the future on their own.

Sherlock: When someone is addicted to opium, there are two ways to deal with him. Continue to supply him with opium and he will be thankful to you, but in the end, he will have no future.

Or try to get him off addiction by giving him proper support. Hopefully, he will be a useful member of society one day.

However, the easy way out is to continue supplying the people with cash handouts, university quotas, company ownership quotas, etc.

Vijay47: Perhaps the truth is that keeping Malays lost and confused serves a greater purpose for those who would rob, steal and cheat.

How else will a convicted crook continue to draw shameless adulation when the down-trodden among the Malays themselves seem unable to realise while they struggle for their next nasi lemak, the elite dine on udang galah (lobster)?

With leaders like you, Ahmad Fayhsal, and the guidance you offer, you continue to curse your own brethren to a life condemned to be beggars at street corners. And being proud of this achievement.