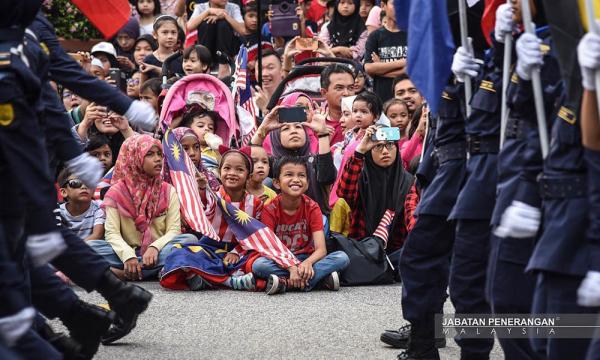 YOURSAY | ‘Better for who? Better for those who now rule the roost?’

Nazir and 54 others seek royal backing for 'national reset'

Kim Quek: Nazir Razak and company take a bird’s eye view of the country when they come up with this idea to reset Malaysia. The proposed ‘Better Malaysia Assembly’ to push for reforms may yet achieve what political parties have failed or find it difficult to do.

The majority of our people are simply too deeply ingrained with racist ideology, and even a reformist political party with the right intention and talent would feel restrained to step into forbidden territory (which are essential reforms) without risking the loss of electoral support.

A non-partisan platform like the one proposed would solve this problem and could in fact be complementary to a reformist party. A most praiseworthy move indeed from Nazir and his friends to extricate the country from the current political quagmire.

MS: While some long-suffering Malaysians, desperate for just a flicker at the end of their long dark tunnel, are falling over themselves to welcome this latest attempt at a "national reset" after the big NEP (New Economic Policy) reset in 1971 and followed by the NDP (National Development Policy) reset in 1991, some questions need to be asked about the 55 promoters of the Better Malaysia "scheme".

How many of them are known to be non-partisan with a history of openly supporting efforts to level the field? How many on the other hand, have personally benefited from ‘ketuanan’ policies and have silently taken racist positions on matters affecting all citizens.

How many others have remained mute in the face of the wholesale pillaging that has taken place over the last 40 years while enjoying the many advantages that accrued from their silence.

And, what exactly is the "social contract" they refer to? And what "affirmative action" are they talking about when it is the minorities that have been deliberately and systematically marginalised and left to fend for themselves.

And finally, what exactly is their position on "ketuanan Melayu/Islam" which unarguably has caused the "systemic dysfunction" now demanding a reset?

All Things Considered: To be honest, many people can tell you what is exactly wrong with this country and what ought to be done to put it back on the right path without all this hoo-ha.

It is all common sense but nobody will listen to these simple and common-sense solutions because there are too much vested interests everywhere.

Also, you plan to put your proposals through Parliament, where all good and sensible ideas will be killed by the racists and religious extremists who are determined to take this country down a dangerous path. I hope your exercise and good intentions don't end up in vain.

Karnak: The ‘Better Malaysia’ proposal goes back to Parliament? Then what's the point?

Both sides will disagree with the finer details of the recommendations and then do nothing to amend and pass new laws. They will absolve themselves of doing anything, ascribe some hidden motives to the entire matter and be done with it.

Unless the Agong comes right out and says this will be done and has the backing of the Conference of Rulers so both sides don’t dare do anything for fear of insulting the rulers.

But that means the monarchy stepping in and taking a direct hand in proceedings. Would that be constitutional? I feel if the Agong and the Conference of Rulers are going to do it, just do it.

IndigoTrout2522: This is not a good idea at all. Malaysia is a parliamentary system. MPs are elected by the people to decide on policies and laws. Why get the royalty involved as it is above politics?

This group, which really is from the rich and powerful, could just set up their own NGO. It is more important to educate the voters to vote for honest, dedicated, incorruptible and competent MPs and state assembly representatives, and laws that will punish frogs and the corrupt, and term limits for all elective offices.

Strengthen the judiciary system to be independent. Reduce the power of PMs and establish a strong and independent agency to monitor and investigate corruption across society, including government servants, police, politicians and businesses.

The big question is whether there is a political will to do this, not another unelected powerful and rich ‘kitchen cabinet’.

Malaysia Bharu: Has the Better Malaysia cartel and the Agong the power to instruct and override the ruling regime or Parliament to implement reforms and reset the direction?

At the end of the day, whatever reforms need to be voted on by the upper and lower houses.

Our 3R (race, religion and royalty) politicians are not known to endorse anything that they see as a hindrance to their vote base and their survival. The trend of the recent Malacca election is a living testament that race, religion and corruption are a winning combination.

To some of these thieves and parasites, the people and country come last in their book. The sinking state of the country today is mainly due to 50 years of politics of race, religion and corruption. Can the corrupt 3R politicians do without the abuse of these elements?

Federal Bakery: I cannot understand the logic of a few individuals deciding to speak on behalf of the nation. Worse still, they want the approval of the king when the king is the head of the Parliament.

If these self-appointed superheroes are sincere about anything, they should convey their dissatisfaction to His Majesty that the parliament that he is head of is in disarray.

An assorted bunch, some of whose credentials clearly do not qualify them to represent the people's interest, taking over from the Parliament under the auspices of the king will simply plunge us into deeper holes of crisis.

Max Fury: I think this will work. When everything in this country is so political and politicians are only in it for themselves, an assembly like this with the support of the royals may just be what we need.

PurplePanda6160: I see the proposal as a continuing effort by an "elite" group to concretise and further strengthen their rule and control over the country. The game has always been to control the national wealth and make permanent their power.

Malaysia is a very rich land. With right policies and honest project implementation, everyone in Malaysia should be able to live happily with reasonable wealth ownership. But no, the elites have designed, since Merdeka, that they have to control and enjoy 80 percent of the national wealth.

The above group as listed by Nazir understand the situation very well. But is their objective to address the real national problems, including the redistribution of national wealth among Malaysians?

Ahmed: This country is in need of a period of introspection, reflection and major course correction. By any and every metric we are headed in the wrong direction, which is non-productive in the short term and fatally destructive in the long term.

For too long, our public discourse has been dominated by narrow sectarian interests articulated by shrill voices that have sidelined the moderate elements that still comprise the majority of this country.

It is tempting to be cynical and dismissive but this offers a path to navigate the quagmire that has overwhelmed our politics. It’s an initiative that deserves our wholehearted support. I wish it every success. It’ll be a hard row to hoe.

Gaji Buta: To me, the only reset that might work is to reset everyone's race and religion to zero, and let all choose religion themselves. Start anew.