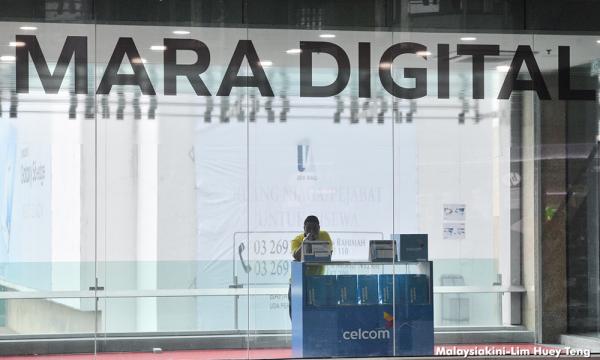 YOURSAY | 'Its dismal condition reflects the character of its promoter, Ismail Sabri.'

OCT: No success can be achieved when the idea was borne out of a racial incident. There was no planning, no strategy, and no understanding of the business. It is a recipe for failure.

Mara digital malls were initiated not based on a legitimate business model but from spite to rival Low Yat Plaza. Low Yat dealers had established vendor relationships with foreign manufacturers.

Mara digital malls have no such supply chains. So, how to succeed? Businesses don't succeed without effort, hard work, and business acumen.

Prime Minister Ismail Sabri Yaakob has no past considerations to shout about. His standard operating procedures (SOPs) and movement control orders (MCOs) were failures. However, he was lucky to be at the right place and the right time to become prime minister.

It looks like race and religion are still important factors for BN despite their business failures.

Coward: If Mara Digital Mall was a success, they would not be needing to propose a bumiputera quota for prime shopping mall spots.

Both approaches do not address the root cause of the issue - the competitiveness of bumiputera entrepreneurs when the playing field is level. Their inability to compete is the result of decades of misguided and failed policies.

Until that is resolved, and Malay entrepreneurs do not have to deal with a distorted market which shackles their business and does not reward entrepreneur spirit, more misguided policies will do more damage instead.

The Analyser: Governments should never be involved in commercial ventures. But then, when has Malaysia ever had a proper government? All we ever get are self-serving leaders who seem to know everything but achieve nothing.

By the way, Bangi MP Ong Kian Ming, have you been into the average mall of late? Kuala Lumpur is oversupplied with malls thanks to the poor planning skills of local governments and the low intelligence of investors with too much money to spend.

There was a certainty that many malls would collapse in the near future; the pandemic just accelerated the process, as it did with many other poorly conceived and badly managed enterprises.

MS: The decision to set up the Mara Digital Mall was driven by pure spite, as a vile expression of ketuanan-ism (supremacy). Its dismal condition reflects the character of its promoter, the inciter-in-chief Ismail Sabri.

It was doomed to fail from the outset only because business sense and economics did not feature in its setting up. But that has never stopped the fools from doing more of the same.

Tropic Plunder: The so-called “prime retail locations” are actually being upended by tech platforms all around the world.

E-commerce is replacing traditional forms of retailing and yet these simpletons want in with a race quota. They should try demanding 51 percent of shares in Amazon, eBay, Lazada, Alibaba, Grab, JD.com, Softbank etc.

Max Fury: We can buy all the gadgets and accessories online and it’s so much cheaper. Most people don’t go to retail shops anymore. Why still bother with digital malls, or any malls? Malls are becoming obsolete.

Many of these physical retailers are suffering due to competition from online shops. The government should stop wasting money on these malls and look at how they can help bumiputeras take advantage of doing business online.

Gotcha: The Mara Building IT outlet solely meant for bumiputera retailers along Jalan Tajuddin Ali or Jalan Kidd in Ipoh is also dead. Now, there are a few F&B outlets and there was also a massage operator.

To be really successful, one should not operate at “single race” places or buildings. Sad to say, even bumiputera don't want to visit such places.

OrangePanther1466: YB Ong, I agree with you that we wish the bumiputera to succeed. I too had supported the New Economic Policy (NEP) but had issues with its implementation. Please do not assume that all non-Malays were against the NEP.

The growth model of 1980-2000 was a sustainable one where all races were set to benefit from an expanding economy led by massive government spending and adoption of new technology.

Imposing quotas arbitrary like what the PM has done will not work. The business model must work first. Otherwise, how is the enterprise going to survive and pay the rent for the mall space?

GoldenCamel5152: The person who proposed these initiatives already knows it will fail. The whole idea is to give the perception that he will continue to dish out these goodies to maintain or increase their vote bank.

After all, he is not using his father's money but taxpayer monies, and unfortunately, we have a large enough segment of the population who fall for these scams.

FairMalaysian: These policies are driven primarily by two factors - greed and jealousy. Lacking leadership qualities, Malay leaders dug into the lives of the non-Malays to politically appease the majority populace.

All because power has been in their hands for a long time and those from MCA and MIC have turned a blind eye to these travails as long as they got rewarded.

This is definitely not a sustainable policy in the long term. It instead creates a "crutches" culture, forever depending on the government. Of course, the government will love this as this will be their vote bank.

I think the Malacca win for Umno/BN was simply a fluke. Any attempt to play up racial issues will cause a resurgence from the opposite side.

Despite racial gerrymandering, the opposition did pretty well in the 14th general election (GE14), even with the odds stacked against them.

Moreover, the backdoor "Malay" government collapsed just after some 17 months. It can be deduced that the present premier, Ismail Sabri, is on life-support.

The overtures by all the Malay parties to the non-Malays say it all. You should have read PAS president Abdul Hadi Awang's message just before the Malacca polls. Absolutely no shame.