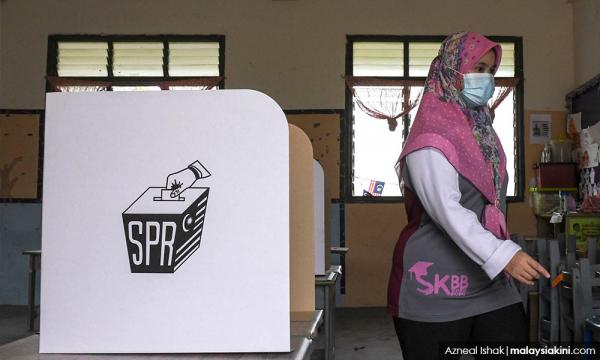 YOURSAY | ‘MPs should ask Muhyiddin to resign as PM if he can’t handle Covid-19.’

GreenHawk6489: What a shame, the government can't handle the by-election in Batu Sapi constituency in Sabah and Sarawak state election. What is Perikatan Nasional (PN) government thinking?

The government wants an emergency for a small problem like voting in Batu Sapi constituency during the pandemic. Don't we have the standard operating procedure (SOP) in place? Just follow the SOP.

Also, don't let Peninsular Malaysian politicians campaign in Sabah. If they do, they must follow the strict 14-day quarantine and the SOP. Let the Batu Sapi by-election be a local affair or give it a walkover.

There’s no need to go to the Yang di-Pertuan Agong to seek an emergency for such a tiny issue. It’s ridiculous. This PN government is really hopeless.

Brahminy Kite: It’s not that there’s no other choice. If PN is sincere, just give Warisan a walkover for Batu Sapi.

How come BN, Pakatan Harapan and some Sabahan parties have already pledged not to contest in Batu Sapi but Bersatu and PAS are so hard up on contesting the constituency?

This just shows their insincerity in overcoming this Covid-19 pandemic.

Jetson: What is this agenda of declaring an emergency in states or constituencies that are facing elections? Why the sudden emergency fever?

Is it because if emergency is declared, the rules will be more in their favour? That they will have full control over the area and can decide which rules to introduce?

What about the rights of the opposition and the public? Will those in power dictate the terms of how an election in an emergency will be held?

It looks like we have some power-hungry politicians who want to start changing the face of this nation to suit their agenda.

Now that PAS has got the taste of power and the good life, it seems like they are willing to sacrifice laws, rules and principles just to hold on to their seats.

Kuniyo: Indeed. First, they tried to stop Parliament but failed. Then they limited the number of reporters, limited the parliamentary session to 1pm.

Recently, they limited the number of MPs to only 80 at one time. Then they limited Question Time from one hour to five minutes. Now they want to study the law to suspend an election.

All these are done “to prevent the spread of Covid-19”, but they’re actually to prevent a no-confidence vote and to prevent Budget 2021 from being rejected.

Have you seen Prime Minister Muhyiddin Yassin in unfiltered press conferences? Apparently, transparency and accountability are not their thing. After all, they came through the backdoor.

KCAmpang: I agree. The government should not be obsessed with the idea of emergency which only raises public suspicion of a political motive.

The rakyat understands that emergency would result in the suspension of Parliament, but we cannot see its benefit in controlling the spread of Covid-19.

There are more than 10 countries, rich and poor, that had successfully held elections during the pandemic without much problem – among them, France, Germany, Poland, Singapore, South Korea, Burundi, Dominica and Mongolia.

Malaysia was mentioned by the World Health Organization (WHO) as one of the role models with successful public health control measures. We should be able to hold elections if we are properly prepared and all political parties adhere to the SOP when campaigning.

We still have more than six months to prepare for Sarawak, if the chief minister is not in a hurry.

And for Batu Sapi by-election, which will be held soon – and soon after the poorly run state election that resulted in the spike of Covid-19 cases nationwide - most parties have already decided not to take part.

Constitutional Supremacy: Attention, Sarawak. If the federal government declare an emergency, then your rights will be trampled and the state government will be suspended.

There will be a direct order by the prime minister. Muhyiddin, Hamzah Zainudin and Azmin Ali will use the emergency to establish Bersatu in Sabah and finish off Sabah.

Thus, to save yourself from this madness, you have to declare publicly that you will not dissolve the state assembly until May next year.

If PN can buy over state assemblypersons in Sabah, they can do it in Sarawak too and break up GPS. So, wake up, GPS! Be alert on the danger of emergency in Sarawak.

Why can’t the Batu Sapi by-election go on when in the United States over 300 million people had voted amid the pandemic?

No emergency, please. MPs should ask Muhyiddin to resign as prime minister if he can’t handle Covid-19.

GreenTurtle6724: How is a "selected area" to be defined? What will be the boundary? How will it be described and marked?

Is there a hard boundary line for Batu Sapi? It is not as if the Batu Sapi area is fenced up.

Monologue: Emergency proclamation is not the solution here. The Agong has given a loud and clear message - no abuse of power.

Drop the issue now and move on, please.