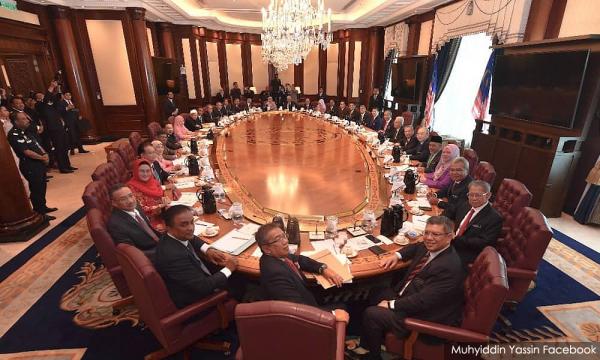 YOURSAY | ‘Covid-19 is not a legitimate reason. Many countries have it even worse.’

'Emergency' will cause descent into dictatorship – Anwar

Kim Quek: The prime minister may advise, but it is up to the King to make the final decision whether to declare a state of emergency.

This is my interpretation of Article 150(1) of the Federal Constitution which states: “If the Yang di-Pertuan Agong is satisfied that a grave emergency exists…, he may issue a Proclamation of Emergency making therein a declaration to that effect.”

Nowhere is it stated that King is “to act in accordance with advice, on advice, or after considering advice” as highlighted in Article 40(1A) of the same Constitution.

Similarly, the King also has the final say on whether an emergency ordinance advised by the PM will be enacted, as Article 150(2B) stipulates that its enactment is subject to the King’s satisfaction.

As the ultimate defender of the Constitution and protector of the Malaysian people, I sincerely hope that the Agong will not rush to declare an emergency but to consult the opposition and the civil society before making his final decision to ensure the people’s best interests are protected.

A wrong move at this critical time could have a disastrous consequence on our economy arising from severe loss of investors’ confidence, as the PM’s current push for emergency rule is already widely perceived at home and abroad as a reckless political move to cling on to power by sacrificing the people’s interests.

It is very clear that Prime Minister Muhyiddin Yassin has a political motive for declaring emergency. We can only hope that the King will decide wisely so as not to drag this country further down the rabbit hole.

An emergency declaration might bring us so far down that it would be very difficult to come back from it. The country is so messed up as it is already. We do not need to pile even more mess on top of existing ones.

BlueShark1548: If an emergency is declared, it only supports the rakyat’s perception that Muhyiddin has no confidence to face Parliament, and he is using Covid-19 as an excuse to declare an emergency so as to keep his PMship.

There is no need for an emergency as the Health Ministry in its daily briefings assured the public that it could contain and prevent the spread of Covid-19. So why suddenly the cabinet decides to seek a declaration of emergency?

Bear in mind that those seeking the declaration of emergency are those who would lose their posts if Muhyiddin fails to get enough support in Parliament, i.e. conflict of interests. So how can PM advise the Agong when he has a personal interest in the issue?

I hope we have upright Malaysians amongst the non-cabinet members who could give their independent advice to the Agong.

Emergency has dire consequences on our economy and the rakyat, besides opening a road to dictatorship.

Even without emergency, this Perikatan Nasional (PN) government had abused its powers; what more under emergency powers where their actions cannot be questioned in Parliament.

If one had been paying attention to the chain of events in the country, it was foreseeable that Muhyiddin had an agenda to keep his regime in power by using all political tools.

IndigoTrout2522: Declaring a national emergency and suspending Parliament will be a big mistake. Covid-19 is not a legitimate reason. Many countries have it even worse.

If Muhyiddin does it, this will be worse than Umno’s 60-year rule. It only shows he wants to rule without having to worry about an opposition.

1. Is this why the Agong did not proceed (on the basis of opposition leader Anwar Ibrahim’s documents) to order Prime Minister Muhyiddin Yassin to seek a vote of confidence in Parliament and dispel all doubts once and for all?

2. Did he feel that Muhyiddin will not get the support he claims to have?

3. Did he leave Muhyiddin with no option other than to declare a state of emergency and suspend Parliament as the only way to remain in power?

4. Will declaring a state of emergency tell the world that Malaysia is no longer experiencing political uncertainty?

Rupert16: I can’t agree more with Anwar on this issue. It looks like the backdoor government is now trying to use the “emergency door” to avoid being kicked out of Putrajaya.

YellowEagle3055: So, it must be true that PN has lost the majority. Anwar wasn't lying. Or else why would they go through such drastic measures as declaring emergency to avoid facing Parliament?

Other countries with a worse situation than Malaysia can tackle the Covid pandemic without resorting to such drastic measures.

Bluemountains: I hope the King and his brother rulers do not just listen to the cabinet, but also take the views of others like the opposition MPs and NGOs into account.

We are facing a health crisis, and it requires an emergency health action plan, not a political plan.

Allowing an emergency to be declared on flimsy excuses would allow a PM who no longer enjoys the confidence of the majority of the MPs to remain in power, and this is against the spirit of the Constitution.

Muhyiddin does not have half of Mahathir's guile and wit. There will be a public uprising if he goes ahead with a state of emergency.

The truth will finally be revealed whether the Agong is king of the people or otherwise. There is completely no justification to use emergency powers when we have already effectively used the movement control Order (MCO).

ZainiHussin: Instead of being a cultured, civilised and developed nation in 2020, Malaysia has now sunk into the deepest depth of being an uncivilised nation by embracing emergency.

What nonsense is this? Just so that a few goons can cling on to power? Malaysia is fast becoming a joke in this region.

Redmann: Strange, isn’t it? The Federal Constitution allows for a state of emergency to be proclaimed and effectuated, and once that's done the enabling Constitution gets suspended?