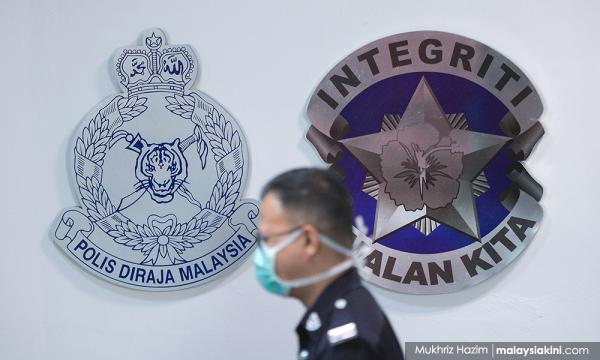 YOURSAY | But for those related to PN, it’s ‘no further action’ until there’s public outcry.

Vijay47: If the rumour mill is to be believed, it is an opposition leader’s granddaughter. If she had broken the law, simple, just charge or fine her.

While she seems to have only broken the recovery movement control order (MCO) hours, rumours allege she was drunk. Which makes me wonder – generally, is it illegal to be drunk if you do not cause any public disturbance or you are not driving?

It doesn’t matter who broke the law, just take appropriate action fairly. It is understandable if the press reveals that amongst those arrested was a VIP’s daughter or granddaughter.

But when the police themselves do it, it smacks of special negative treatment, it is none of your business who those arrested are. Did you mention the personal details of all the others arrested?

Kuala Lumpur police chief Mazlan Lazim, please spare us speeches about how the police will not compromise, practise double standards and all the rest of it. Just do your job.

IndigoKite6964: Never say never. The public can probably recount the number of times when double standards were in full display.

The most recent case being a 72-year-old makcik versus Plantation Industries and Commodities Minister Khairuddin Aman Razali, who were both punished for breaching Covid-19 standard operating procedures (SOPs) but were given different treatment and sentences by the authorities.

It seems like double standards when an elderly woman was fined so much more than the minister and had to also spend a day in jail whereas the other had to pay what is apparently pocket money to him. Both broke the same law and in the same way.

But the police had to go to Parliament to take the minister’s statement. Why wasn't he taken to Bukit Aman in handcuffs to have his statement recorded and then presented in court?

Well, as they say, it takes time and effort to build up a good reputation and integrity but it just takes one incident to tear the whole thing down and saying never will not help unless you are telling us that Khairuddin is something else other than an individual.

Rupert16: “The Kuala Lumpur police will not practice double standards and will never compromise towards any individual, including the child of the said VIP, who was found to have breached recovery MCO SOPs.”

Let’s hope that the same standard will apply for Khairuddin. In the past, double standards had been practised by the police when handling similar cases involving sons and daughters of prominent Umno leaders.

PurpleOrca1561: Why is the police emphasising the words “double standard”? Is it because the VIP is an opposition member?

It doesn't matter who, be it VIPs, ministers, opposition members or otherwise - if one has committed a crime, they need to be charged, and if found guilty, sentenced.

The police should not put up a show which only comes off as fake. Just carry on with your duties sincerely, and we will decide if the standard is single, double, fair or unfair.

But when it comes to Perikatan Nasional leaders/members and their families, it's “no further action”, close one eye, chicken-feed fine (for VIPs), no arrest, no orange suit (where appropriate) and all manners of monkey tricks.

Hmmm: The fact that you have to announce that you do not practise double standards is already an admission that you do exactly that.

You will never hear police in developed, non-corrupt countries declaring this to the public.

OrangeHornet9195: Funny, why did the police have a need to say the person is the daughter of so and so? If someone has committed a crime, arrest him or her. Full stop.

Free Thinker: I hope it’s not only pubs that are being raided for such violations. Try driving around town past midnight and see how many restaurants are also not complying with Covid-19 SOPs.

By the way, congratulations that you (not the police but you know who) have successfully reduced the number of pubs in Malaysia. What was once a legal business has now become illegal because they couldn't get their beer/liquor licence renewed.

Covid-19 has been helpful in your agenda and no one can say you are wrong. Well played.

Amoker: Yes, go to the restaurants and see if the recovery MCO is adhered to. Let the police charge all the individuals, and there is no need to identify them. So what if it is the daughter of an opposition politician? Just charge her.

Meanwhile, when former prime minister Najib Abdul Razak's people came down to rally for him in front of court, including VIPs, none of them was charged by the police. It was also during the same recovery MCO.

Business First: Oh dear, poor kid. Anyway, if she was drunk, it is a personal matter so long as it does not harm others.

It matters not if those caught are VIPs or related to VIPs or otherwise. Just treat them fairly and let the law takes its course like the one involving then defence minister Mohamad Sabu’s son (in his drug case).

Anonymous 79: It's good to hear police saying they will not practise double standards. I wish our inspector-general of police will soon recommend the prosecution of the minister who breached Covid-19 quarantine.

The above is a selection of comments posted by Malaysiakini subscribers. Only paying subscribers can post comments. In the past one year, Malaysiakinians have posted over 500,000 comments. Join the Malaysiakini community and help set the news agenda. Subscribe now.