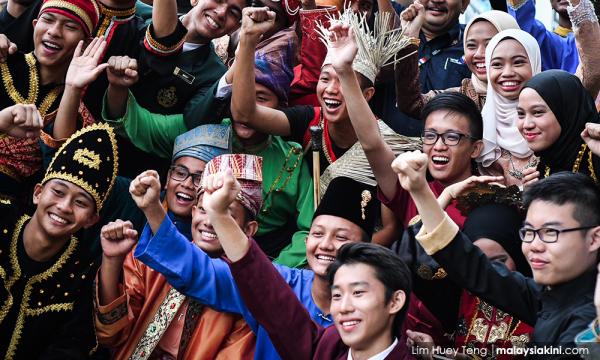 MP SPEAKS | I call on Malaysians to reunite and dare to hope and struggle again for the restoration of dignity and decency in a New Malaysia. For a place where there is unity, democracy, justice, freedom, excellence and integrity.

In the past few days, apart from the political persecution of Betty Chew - just because she is the wife of former chief minister Lim Guan Eng - Malaysia has been buffeted by a series of events which highlight a gross deficit of dignity and decency in public life, which must be the concern of all thinking and patriotic Malaysians, regardless of race, religion, region, age or gender.

We read of netizens rallying behind a teenager who was fined RM1,000 for purportedly pulling down his face mask while waiting on a platform for a train.

Kepong MP Lim Lip Eng had offered to assist this teenager, urging the student to contact him for help.

In fact, all members of the public in such circumstances should be refunded the bulk of their fines as Malaysians were right to question the seemingly uneven enforcement of the compulsory face mask rule, after a number of politicians who were photographed without masks in public places were not affected.

As DAP’s Bandar Kuching MP Dr Kelvin Yii suggested in Parliament last week, reduce the RM1,000 maximum fine for violating the face mask regulation to RM200-RM300 for first-time offenders, as the current amount accounts for 83 percent of the monthly minimum wage in Malaysia. Compare this to the face mask fine in Victoria, Australia, that comprises 6.7 percent of the monthly minimum wage.

This is not fair as the main purpose of the fine is to educate and not to punish the public.

In fact, as Sarawak DAP leader Abdul Aziz Isa (above) has suggested, lower the face mask price ceiling for people in need, such as those in the B40 category, as they earn a below-average income.

In a Malaysia that upholds decency and dignity in public life, these problems would not happen or would be resolved rapidly and not be allowed to hang over the people’s head.

Public decency, dignity and morality in Malaysia have descended to such a pass that we have elected representatives “frogging” political parties without shame, a federal government minister surreptitiously vaping in Parliament and public officials shamelessly and remorsefully abusing and bartering their official positions for personal and political gain.

The unprecedented speed and ubiquity of misinformation

One of the greatest challenges of the Internet era and information age is to ensure a high level of media literacy in the country, to ensure that Malaysians can differentiate between truth and lies, facts and falsehoods, information and misinformation, and not to share what they have received on WhatsApp, Facebook or YouTube until they have verified their legitimacy or truth.

It is not that lies and falsehoods have not been peddled in the past, except that the unprecedented speed and ubiquity of misinformation now could not only destroy reputations but could cause the fall of governments and ruination of nations.

I would like to know who had been more demonised than me in my 55-year political life.

I have in the last decade been accused of being a communist, even a relative of Chin Peng, but the authors of these lies did not realise that in the 1969 general election, which I contested, the “communist” forces were campaigning for the defeat of me and the DAP.

I have been accused of being born in China, that I somehow swam to Malaysia when I was 17, completely disregarding my primary and secondary school years in Batu Pahat, Johor.

I was accused of being anti-Malay and anti-Islam when I do not have a single bone or sinew which is anti-Malay or anti-Muslim.

There is a video of PAS president Abdul Hadi Awang, during the Teluk Intan by-election in May 2014, narrating how DAP defended PAS in 1978 when the Kelantan government fell to BN, causing chaos within the state.

Hadi said BN, which was working with PAS then, did nothing to help them. Only DAP defended PAS at the time.

That was 2014. I do not know whether Hadi would stand by his Teluk Intan by-election speech.

The campaign to demonise me and Guan Eng took on a systematic and diabolical character after the political tsunami of 2008, when he became the Penang chief minister.

When my grandson was 15 years old, he was accused on the Internet by Umno cybertroopers of sexually molesting his female classmate at his school in Penang. Even the name of the alleged victim was mentioned but it was later found that she was from Hong Kong and had never been to the state.

Several years later, this grandson of mine was again targeted by Umno cybertroopers who peddled the false news that he was arrested at the Singapore International Airport for trying to smuggle in RM2 million in cash and that Guan Eng, then the finance minister, had flown to Singapore to secure his release.

These were unequivocal lies, as revealed by the inspector-general of police who said no such arrest had been made in Singapore and that Guan Eng had not left for the island city-state during that period.

Now the Umno cybertroopers are trying to portray Chew as Rosmah Mansor Number 2.

This gave wing to a netizen to indulge in his imagination on social media. He satirised: “MACC and police raid Chew's home. Takes away her valuables listed as one trove of Mills and Boons and Enid Blyton books, an assortment of hair bands, cutlery and China pieces (with broken edges actually), Formica topped furniture pieces, a wide array of Chinese wooden clogs, love letters making crimps, PVC handbags, hair curlers, cooking utensils and half bottles of Knife brand cooking oil and many other items that MACC claims is linked to her money laundering and terrorism funding case...

But this is no time for petty or revenge politics.

It is time for patriotic Malaysians to save Malaysia with a common vision and perspective, where Malaysians, whether Malays, Chinese, Indians, Kadazans, Ibans, or Muslims, Buddhists, Christians, Hindus or Taoists, have more in common with each other than any other person in the world, enjoying unity, democracy, justice, freedom, excellence, integrity and decency.

Remember Burke - the only thing necessary for the triumph of evil is for good men to do nothing!

Let all Malaysians continue the quest for Malaysia to become a top world-class nation by leveraging on the values and assets of the diverse races, religions, languages, cultures and civilisations which meet in confluence in Malaysia.

LIM KIT SIANG, the DAP veteran, is the MP for Iskandar Puteri. You can also follow him on his blog and Twitter.