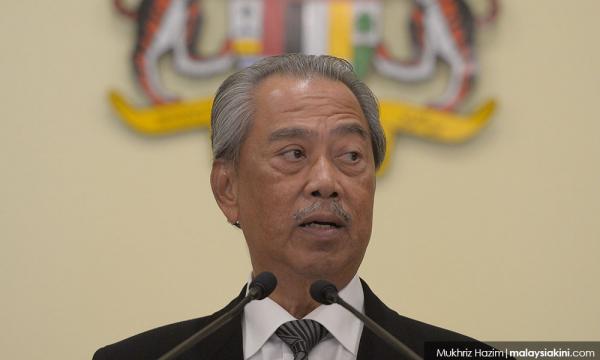 COMMENT | On April 7, New Zealand Health Minister David Clark was stripped of his position as associate finance minister and demoted to the bottom in cabinet ranking. His “crime”? Violating the country’s lockdown order by going to the beach with his family on a weekend.

Clark is expected to lose his job when the outbreak is over. Prime Minister Jacinda Ardern declined his offer to resign only because she did not want to disrupt the health sector now.

The no-nonsense prime minister said, "I expect better, and so does New Zealand."

On April 5, Scotland’s chief medical officer Dr Catherine Calderwood (the functional equivalent of Malaysia’s Health director-general Dr Noor Hisham Abdullah), resigned after the media reported that she had made two trips to her second home with her family.

Chief Minister Nicola Sturgeon initially wanted to keep Calderwood but soon this became unacceptable for the public. Calderwood violated the stay home order she personally promoted. She was also given a travel warning for her second trip by the police who stopped her.

So, how can Deputy Health Minister Dr Noor Azmi Ghazal and Deputy Rural Development Minister Abdul Rahman Mohamad keep their jobs as if nothing happened?

Noor Azmi had a feast with Perak exco member Razman Zakaria and 20-30 others at a tahfiz school in Lenggong, Perak.

Abdul Rahman had his supporters celebrate his birthday with him and accused netizens of “misinterpreting” the occasion revealed on Facebook.

If ordinary citizens get slapped with hefty fines and jail term for breaking the movement control order (MCO) while deputy ministers and their supporters can get away scot-free with some Johnny-come-lately apologies, then we know the stern attitude on MCO violators by Senior Minister Ismail Sabri and Inspector-General of Police Abdul Hamid Bador is selective.

One MCO, two systems: one for ordinary citizens, one for the ruling elites.

Why Muhyiddin dares not reprimand lawbreakers

But beyond police action, why doesn’t Prime Minister Muhyiddin Yassin, who vowed to be a PM for all Malaysians, reprimand the two law-breaking members of his government?

Even if short of sacking the duo, Muhyiddin can express his strong disapproval by at least ordering them to donate another month’s salary for breaking the rule.

This would make Muhyiddin look good and powerful in the eyes of the public. The same goes for Bersatu’s Perak Menteri Besar Ahmad Faizal Azumu if he would reprimand his exco Razman.

Why can’t Muhyiddin and Faizal do the politically correct thing, even if it is just for show?

The answer is not that Muhyiddin and Faizal lack leadership and principle. (In the first place, they won’t betray voters and allies if they are principled leaders.)

The real answer: our parliamentary system has become more rotten than before 2018.

What a Westminster Parliament should do

In this sense, the Parliament is really the “electoral college” of the prime minister. In countries like Germany and Japan, the chancellor or prime minister is formally elected by parliamentarians.

Besides functioning as the prime minister’s electoral college, the Parliament has three other inter-related functions:

The functions of Parliament, especially that as an electoral college, are intermediated through political parties, which further divide parliamentarians into three groups: government frontbenchers, government backbenchers and opposition members.

Whereas ministers and deputy ministers (government frontbenchers) must always vote in line with the government (as part of the collective responsibility), government backbenchers are duty-bound to provide checks and balances to the Executive, alongside the Opposition.

In the UK, where single-party majority government is the norm, backbench revolt becomes a key device of checks and balances. British Labour’s last leader, Jeremy Corbyn, defied his party whip for 428 times from 1997 to 2010 when Labour was in power, or 33 times a year on average. He was never sacked or denied parliamentary candidacy.

Beginning mid-1980s, through ballot drawing, up to 20 government backbenchers and opposition members in each sitting have a realistic chance to introduce laws through a private member’s bill.

What the Malaysian Parliament actually did

Up until 2018, a single-bloc majority government with absolute control of the Parliament was the norm for Malaysia.

Every government’s budget got passed without any modification. No vote of no confidence ever got into the agenda. No vote of confidence was tabled by the government except by Tun Hussein Onn in 1976.

In short, the mechanism of “confidence and supply” was effectively non-existent. The “electoral college” function was completely forgotten until mid-2008 when PKR leader Anwar Ibrahim plotted to entice the crossover of 30 government parliamentarians to oust prime minister Abdullah Badawi.

The Malaysian Parliament was not even making laws. With extremely rare exceptions when bills were withdrawn by a minister, every government’s bill got passed. Except for PAS leader Hadi Awang’s Bill 355, no private member’s bill ever got debated.

Lawmaking was therefore effectively a function of the Executive, carried out by the Attorney-General’s Chambers (AGC), not of the Parliament.

So, what did most of our parliamentarians really do? Providing constituency service and dishing out constituency development fund if their coalition controlled the federal and/or state government.

The state of our Parliament was reversed after the 2018 regime change for two reasons.

First, Pakatan Harapan was not only checked by a hostile opposition, but also internally fragmented, hence enabling real checks and balances.

Second, in line with Harapan's electoral promise, parliamentary and other institutional reforms were introduced.

That we no longer have a strong government is a good thing. However, the serial machination – from prime minister Dr Mahathir Mohamad’s yearning of a partyless government to Muhyiddin’s outfoxing triumph – has overkilled to produce the politically weakest government we have ever had.

Consequently, the Parliament’s role is reduced to one – the electoral college of the prime minister.

Without a common programme for governance, what glues together the possible 112 MPs who back Muhyiddin? Alternatively, what might glue the 131 MPs in Sheraton Hotel on Feb 23 who wanted to back Mahathir till 2023?

What else if not power? If not the prospect of perks, prestige and popularity to be ministers, or to head government agencies or government-linked companies (GLCs), or to distribute patronage to their clients in the constituency?

Since PN is very much a marriage of spoils, Muhyiddin cannot be the PM for all Malaysians.

He has to first and foremost be the PM for the 112 parliamentarians who back him. They control him as much as he controls them. They feed off each other.

If Muhyiddin reprimands Noor Azmi (Bersatu) and Abdul Rahman (Umno), and they desert him in retaliation, would Mahathir or even Anwar not welcome them in the name of saving Malaysia? Wouldn’t many of our readers here cheer too?

Unlike in New Zealand, our politics cannot afford honour and decency. It’s beyond Muhyiddin.

And that is the real tragedy.

WONG CHIN HUAT is an Essex-trained political scientist working on political institutions and group conflicts. He currently leads the clusters on electoral system and constituency delimitation in the government’s Electoral Reform Committee (ERC). Mindful of humans’ self-interest motivation while pursuing a better world, he is a principled opportunist.

How did Malaysia lose its spring? A systemic explanation

Can we have more competent ministers?