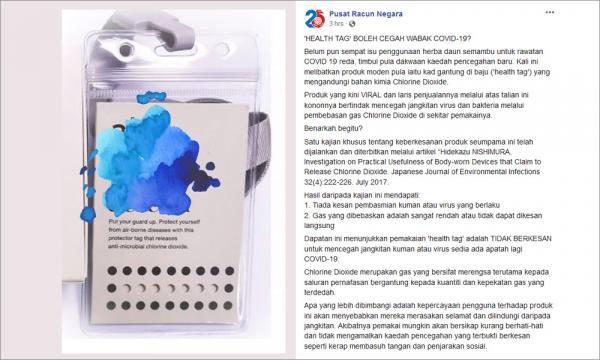 CORONAVIRUS | The National Poison Centre has debunked a claim that a product worn around the neck like a name tag could protect against Covid-19 infection.

Citing a 2017 study, it said such products emitted low or even undetectable levels of chlorine dioxide gas and had no effect on destroying bacteria or viruses.

"The finding shows that wearing such 'health tags' is not effective in preventing existing bacterial or viral infections, let alone Covid-19.

"Chlorine dioxide gas has an irritant effect especially towards the respiratory system, depending on the amount and concentration of the gas exposure.

"What is more concerning is that consumers' faith in this product could make them feel safe and protected from infection.

"As a result, the wearer would become less vigilant in practising proven prevention methods such as frequent handwashing and social distancing,"
the National Poisons Centre added in a statement on Facebook today.

The centre did not name the brand of the product but similar items can be found online including at least one major pharmacy chain.

The marketing literature claims that it consisted of a sachet containing sodium chlorite.

It is intended to be worn around the neck and supposedly releases chlorine dioxide gas that would eliminate 99.9 percent of viruses and bacteria in one cubic metre around the user.

The product is supposedly effective for 45 days once it is opened.

It had gained some prominence after certain online marketers circulated photos that purportedly showed prominent politicians and other figures wearing the product.

Malaysiakini is unable to independently verify the veracity of the photos.

Keep up with the latest information on the outbreak in the country with Malaysiakini's free Covid-19 tracker.

Malaysiakini is providing free access to the most important updates on the coronavirus pandemic. You can find them here.