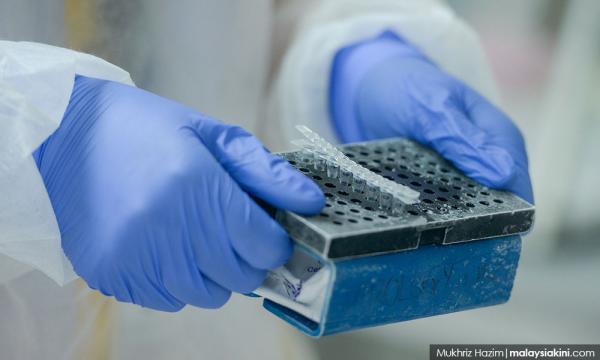 A Covid-19 patient is believed to have come in close contact with a former minister and former deputy minister.

Malaysiakini learnt that the patient, who is a senior member of the Khazanah leadership and the head of a government-linked company, had attended a ministry function with the former minister and the former deputy minister.

It was an appreciation event as they were leaving the ministry following the dissolution of the Pakatan Harapan government.

The event took place on Feb 27 at a hotel in Kuala Lumpur.

Khazanah Nasional Berhad, earlier today, confirmed that one of its employees had been infected by Covid-19.

According to the Health Ministry, patient 26 had travelled to Shanghai in the middle of January.

He developed a fever and sore throat on Feb 27, the same day of the event, and was tested positive for Covid-19 on Feb 29.

He has been admitted to the Sungai Buloh Hospital isolation ward.

Based on photographic evidence of the event on Feb 27, patient 26 was seen standing a few feet away from the former minister and former deputy minister.

Malaysiakini has contacted both of them for comment. One declined to comment while the other has yet to respond.

Malaysiakini understands that at least one of them is under self-quarantine and will get checked soon.

One of them has joined the new Perikatan Nasional coalition while another is part of the Pakatan Harapan coalition.

They had mingled with their fellow MPs during a series of political meetings to deal with the political deadlock that followed after the Harapan government collapsed on Monday.

It should be pointed that as of tonight, there is no evidence yet that the two have been infected by Covid-19.

Furthermore, Covid-19 has an average incubation period of two to 14 days.

Therefore, it is unlikely that they can infect their party colleagues during the short period of time.

The majority of the cases, 79,824 to date, are in China where the outbreak first broke out.

However, the virus has spread to other countries and some governments are now struggling to keep the virus under control.