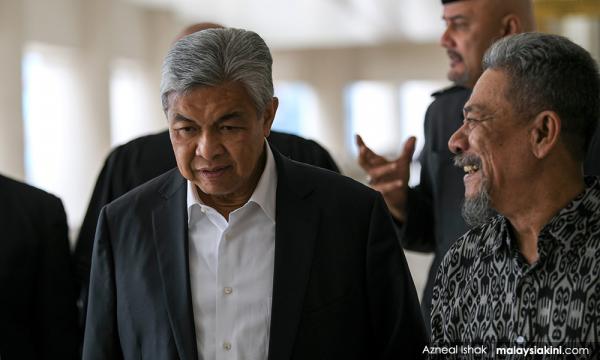 Zahid directed that Datasonic's passport chips to be used - witness

The High Court was told today that the Home Ministry was directed by then deputy prime minister Ahmad Zahid Hamidi to use the passport chips of Datasonic Technologies Sdn Bhd (DTSB), a company owned by his friend, for Malaysian passports.

Former secretary of the ministry’s Procurement Division, Abd Aziz Md Nor, 62, said the directive was in the minutes written by Ahmad Zahid in a letter which was sent to the ministry.

Abd Aziz also identified the letter with the title “Application to begin supply of passport chips together with in-lay to Percetakan Keselamatan Nasional Sdn Bhd (PKN) during the transition period of the existing contract for six months from June 1 to Nov 30, 2016, for Malaysian international passports”.

Asked by deputy public prosecutor Gan Peng Kun to read out the minutes during examination-in-chief, the witness said: “Dato’ Sri KSU (secretary-general), please review the previous decision. Use the chips of this company before studying the contract extension of PKN.”

Abd Aziz, the 33rd prosecution witness, was testifying on the 16th day of Ahmad Zahid’s corruption trial involving millions of ringgit in Yayasan Akalbudi funds and award of contracts for the supply of passport chips.

Gan: What is datuk’s understanding of the minutes?

Abd Aziz: It means the contract with PKN is not extended and instead it is to be negotiated with this company (DTSB).

Asked by Gan why he issued an instruction to speed up the issuance of Surat Setuju Terima (letter of acceptance) to DTSB, the witness said it had to be expedited because the demand for passport chips had reached a pressing level.

Asked during cross-examination by lawyer Hamidi Mohd Noh, who is representing Ahmad Zahid, whether he knew that the Malaysian Immigration Department faced a shortage of passports in 2015 and Ahmad Zahid had asked for the supply of passport chips to be expedited, Abd Aziz said: “I think so.”

When cross-examined by deputy public prosecutor Ahmad Sazilee Abdul Khairi on whether it was a norm for ministers to give orders to expedite certain matters, Abd Aziz said: "Yes, but not always.”

Ahmad Sazilee then jokingly said: "Sometimes it is like P Ramlee films."

Former home minister Ahmad Zahid, 67, is facing 47 charges, with 12 of them for criminal breach of trust, eight for corruption and 27 for money laundering involving tens of millions of ringgit of funds belonging to Yayasan Akalbudi.

The trial before judge Collin Lawrence Sequerah continues on Wednesday.