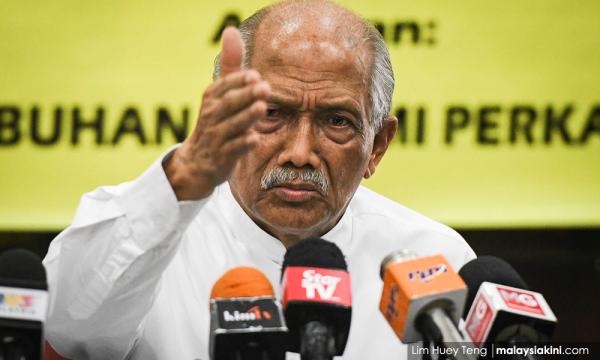 “Many detained al-Qaeda activists have reportedly told authorities that he had been a huge influence on them. He has been living a self-exiled life in the Middle East after being blamed for "influencing" the Dhaka terror attackers on July 1 this year. His offices and schools have since been raided and sealed.” - The influence of controversial preacher Zakir Naik (BBC).

COMMENT | Zakir Naik is going on a binge suing Indian political operatives. His latest target is former Batu Uban assemblyperson S Raveentharan who apparently posted articles which according to Naik – “imputed that the former is a person of bad character and is a threat to the national security, peace, and harmony of Malaysia.”

If Zakir Naik has the audacity to claim that the articles imputed that he was a threat to national security which is why he is suing, then why not sue the former inspector-general of police Rahim Noor (above) who said that not only is the evidence against Zakir Naik strong but that Pakatan Harapan should rescind his permanent resident status.

“With solid evidence of what he said in Kelantan and what he did in India, I urge the government to revoke Zakir’s PR status and hand him over to the Indian government and let him face the laws there.”