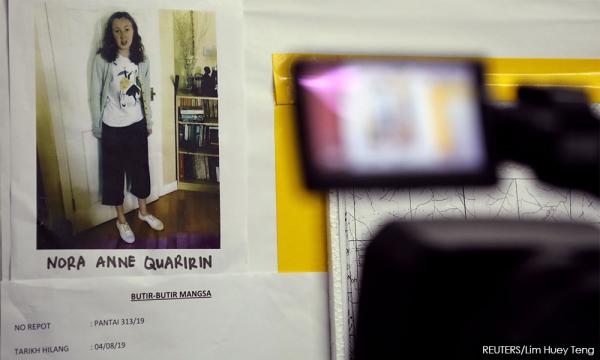 The parents of an Irish girl who was found dead in Malaysia last year have asked authorities in Kuala Lumpur to conduct an inquest into the death, their lawyer said today.

Nora Anne Quoirin, 15, who suffered from learning difficulties, went missing in early August from a rainforest resort in Seremban, a day after her family arrived on holiday.

Her naked body was found 10 days later near a jungle stream in a deep ravine near the Dusun resort, where the family was staying.

Lawyer Sankara N Nair, who is representing the family, said he has written to the attorney-general asking for an inquest on the parents' behalf and is yet to hear back from the country's top prosecutor.

"They feel that the investigation carried out by the police is not thorough," Sankara told reporters at a court complex in Seremban after appearing for case management for a separate civil lawsuit filed by Quoirin's parents.

Sankara (photo) said the family has filed a civil negligence lawsuit against the resort operator claiming RM152,000, claiming that the resort was unsafe.

"My client is saying that the place was unsafe and the window latch was broken. So they are alleging that somebody can take the little girl out (from their room)," he said.

Dusun and the Attorney-General's Chambers did not immediately respond to a request for comment.

The police last year ruled out abduction as a motive, saying they had found no signs pointing to foul play.

Officials have said an autopsy established that Quoirin had died from internal bleeding, probably caused by prolonged hunger and stress. She had suffered intestinal damage, and died two or three days before her body was found, they said.

But the family feared a criminal connection to the disappearance, saying she had special needs and had never before left them voluntarily, a British victims' group, the Lucie Blackman Trust, said last year.