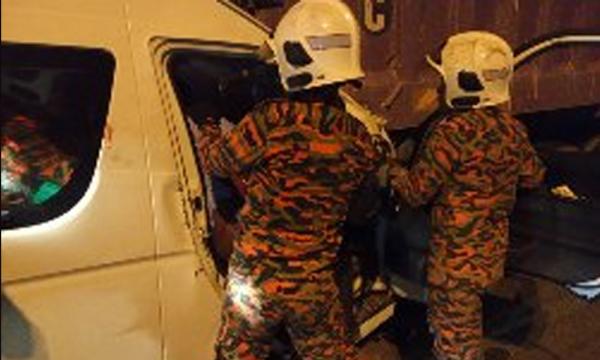 The driver was identified as Bavan Nageswarau.

An initial Fire and Rescue Department report on the incident stated that the incident, which also involved a lorry, took place along the Maju Expressway (MEX) heading towards Putrajaya.

Kento, the current badminton World No 1 champion, was travelling along with assistant coach Hirayama Yu and physiologist Morimoto Arkifuki.

Also in the van, said to be on the way to KLIA, was England badminton technical operator William Thomas, who operates the hawkeye system during badminton games.

All four sustained minor injuries and were taken to Putrajaya Hospital.

The Badminton Association of Malaysia (BAM) said in a statement that it is saddened by the incident.

It also provided an update on the condition of the Japanese team.

It added Morimoto suffered a cerebral concussion and closed fracture.

As for Thomas, he suffered a laceration wound over his forehead and lower limbs.

BAM said all of them are in stable condition.

"BAM is working closely with the Malaysian government and the Putrajaya Hospital to ensure they get the best medical services," it said.

Meanwhile, Bernama reported that CT scans done on Kento and the three others show their injuries are not serious, said Health Minister Dr Dzulkefly Ahmad (below).

"All of them are expected to be discharged (from the Putrajaya Hospital) soon as there are no serious injuries,” he told the media after visiting them at the hospital with Japan's Ambassador to Malaysia, Hiroshi Oka.

In the 4.40 am incident, Kento and the three others were heading to the KL International Airport in a van when it crashed into a slow-moving lorry at KM13.7 of the MEX.

The van driver Bavan, 24, who was pinned to his seat, died at the scene. His body was also sent to the Putrajaya Hospital.

Putrajaya Hospital director Dr Nora’i Mohd Said had earlier said that Kento and the three others would undergo CT scans and other related examinations for a full diagnosis.

She said they suffered abrasion wounds and were all warded and in stable condition at the hospital. She added that some of them immediately required dressing of wounds while the others needed stitches at the OT (operation theatre).

Hiroshi, meanwhile, thanked the Malaysian authorities for the support rendered.

"We are grateful for (the) support given by (this) Malaysian hospital to the Japanese players,” he said.

Youth and Sports Minister Syed Saddiq Syed Abdul Rahman had visited them earlier in the morning followed by BAM president Norza Zakaria a short while later.