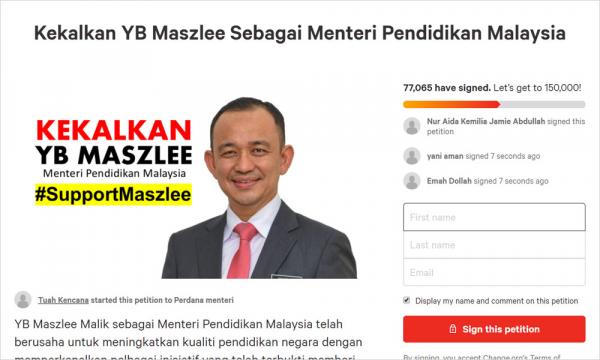 An online petition to retain Maszlee Malik as education minister has gained over 119,000 votes as at 9.30pm.

The petition at Change.org was initiated not long after news of Maszlee's resignation broke, has seen the number of signatories skyrocket over the past few hours.

Malaysiakini is unable to verify if the signatories are real or manufactured and has contacted Change.org for comment.

The petition, directed to Prime Minister Dr Mahathir Mohamad states that Maszlee's resignation is a huge blow to the country and urges the premier to let Maszlee keep his job.

It said that under the Simpang Renggam MP, the Education Ministry had many achievements including free school breakfasts, improvement for special needs education, better high-speed Internet at schools and improvements to the Tvet programme.

However, it said that these achievements were overshadowed by negative and sensationalised reports by "vested parties".

Maszlee had submitted his resignation to Mahathir earlier today.

Asked why he resigned, he simply replied that he respected the prime minister's advice.