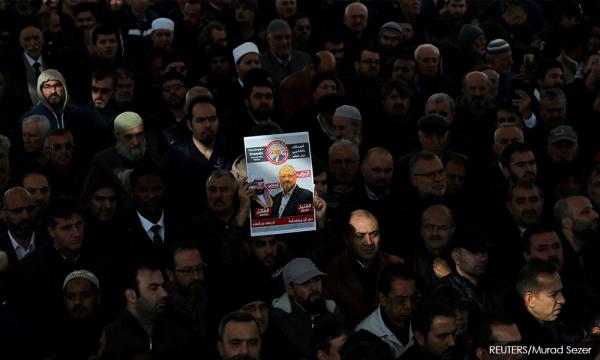 Who are Saudis under spotlight over Khashoggi's killing?

Khashoggi, a Washington Post columnist and critic of Saudi policies, was killed in the Saudi consulate in Istanbul after entering to obtain documents for his marriage.

The Saudi public prosecutor did not name the sentenced individuals on Monday. But the UN special rapporteur on extrajudicial executions, in a report issued in June, identified 11 individuals on trial and those facing death sentences, based on information from various governments’ sources.

Following are profiles of some of those who have been held, investigated, or fired in Saudi Arabia over the Khashoggi case, based on media reports and photos, plus information from officials and sources.

Reuters has not been able to contact the individuals.

The general was an aide to Crown Prince Mohammed bin Salman’s former right-hand man Saud al-Qahtani for information security and the lead negotiator inside the consulate, according to a senior Saudi official. The UN report said Mutreb was involved in planning the operation days before it happened and was recorded referring to Khashoggi as “the sacrificial lamb”.

Mutreb is a senior intelligence officer and in the security team for the crown prince, Saudi Arabia’s de facto ruler and known as MbS. He appeared in photographs with the prince on official visits last year to the United States and Europe.

According to a Saudi official, Mutreb was selected for the Istanbul operation because he already knew Khashoggi from their time working together at the Saudi embassy in London and could convince him to return to Saudi Arabia.

Tubaigy is a forensic expert at the Saudi interior ministry’s criminal evidence department, according to a biography by the Saudi Commission for Health Specialties.

In the Istanbul operation, he was supposed to remove evidence such as fingerprints or proof of the use of force, according to the Saudi official. Tubaigy does not appear to have been a core team member but to have been specifically recruited to dispose of the body, the UN report said.

Also facing death sentences were Fahad Shabib al-Balawi and Waleed Abdullah al-Shehri, both members of the Saudi Royal Guard, and Turki Muserref al-Shehri, an intelligence officer, according to the UN report. The three were among 10 Saudi officials listed in the report as being at the consulate at the time of the murder.

OTHERS WHO WERE ON TRIAL

The former deputy head of general intelligence was among those sacked by King Salman. The prosecutor said he ordered the operation to repatriate - but not kill - Khashoggi. The deputy public prosecutor said on Monday he was acquitted for insufficient evidence.

Asiri joined the military in 2002, according to Saudi media reports, and was spokesman for the Saudi-led coalition which intervened in Yemen’s civil war in 2015. He was named deputy chief of foreign intelligence by royal decree in April 2017.

Madani led the intelligence efforts for the 15-man team in Istanbul, the Saudi official said.

According to that official, Madani donned Khashoggi’s clothes, eyeglasses and Apple watch and left through the back door of the consulate in an attempt to make it look like the journalist had walked out of the building.

The UN report said his presence as a look-alike who wore a false beard suggests the murder was pre-planned. It identifies Madani as a brigadier general employed at the royal palace.

Also on trial were Mohammed Saad al-Zahrani and Saif Saad al-Qahtani, whom the UN report said were at the consulate when the killing occurred, and Mansour Othman Abahussain, who was at the consul general’s residence, as well as Muflih Shaya al-Muslih, a member of the consular staff.

Qahtani, seen as the right-hand man to Prince Mohammed, was removed as a royal court adviser and is the highest-profile figure implicated in the incident.

Qahtani was questioned by the public prosecutor but not charged.

He joined the royal court under the late King Abdullah. He rose to prominence as a confidant in Prince Mohammed’s secretive inner circle. He regularly spoke on behalf of MbS and has given direct orders to senior officials including in the security apparatus, sources with ties to the royal court said.

Qahtani had tried to lure Khashoggi back to Saudi Arabia after he moved to Washington a year ago fearing reprisals for his views, according to people close to the journalist and the government.

Qahtani used Twitter to attack criticism of the kingdom in general and MbS in particular. He also ran a WhatsApp group with local newspaper editors, dictating the court line.

In an August 2017 Twitter thread asking followers to flag accounts for a blacklist for monitoring, Qahtani wrote: “I am an employee and a faithful executor of the orders of my lord the king and my lord the faithful crown prince.”

The Saudi official said Qahtani authorized Mutreb to conduct a negotiation for Khashoggi’s return to the kingdom. The Saudi public prosecutor said a travel ban has been imposed on Qahtani while the investigation continues, but Gulf-based sources have told Reuters he is at liberty and still operates discreetly.

Mohammad al-Otaibi was the Istanbul Consul General at the time of Khashoggi’s murder. He gave Reuters a tour of the consulate four days afterwards, opening cupboards in an effort to show Khashoggi was not there.

The UN rapporteur’s report published recorded conversations Otaibi had with other Saudi officials days before Khashoggi’s murder in which he discussed “a top secret mission”. Otaibi left Istanbul and has not been heard from since. On Monday, the Saudi deputy public prosecutor said Otaibi had been released after being questioned.