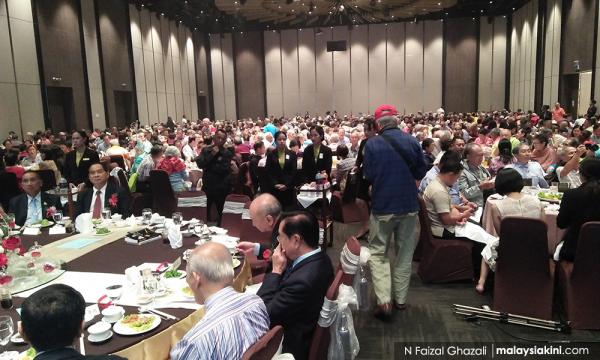 The Home Ministry today confirmed that six of the nine associations believed to be part of the 30th-anniversary gathering (above) of the Hatyai Peace Accord in Kajang early this month are illegal.

Its minister Muhyiddin Yassin confirmed this today, saying that the ministry had received a report on the matter.

“Yes, that is the report that I received, they are not registered. They are illegal associations, only three are registered with the Registrar of Societies (ROS),” he told reporters here today.

Muhyiddin said the police are investigating the reasons the associations held the event.

He said other than the question of registration, the ministry is also looking at why these associations are involved in activities connected to Chin Peng and communism, and if this was an effort to revive the ideology.

“(The outcome) will be made known to the public [...] and if there is evidence that it is connected to an effort to revive (the ideology), we have to take stern action,” said the Pagoh member of Parliament.

Muhyiddin, who is also Gambir state assemblyperson, said since the Malayan Communist Party (CPM) has been banned, the communist ideology should no longer exist in Malaysia.

"We have had a good parliamentary democracy system for 60 years, the country is peaceful and stable [...] so we will not take lightly any effort to deviate from our objective. That is why we must monitor such activities,” he said.

In a statement issued today, the ROS said of the nine associations believed to have been involved in the anniversary gathering, only three have been identified as registered under the Societies Act 1966 (Act 335).

The ROS has issued a notice under Section 66 of the Societies Act (Act 335) that the committee members of these association have to provide information on their association’s involvement in the event.

Replying to a question, Muhyiddin said it was necessary to expose the names of the illegal associations to their members.

“Maybe those involved were not aware of such activities, if their association is not registered, they cannot conduct any activities. It contravenes the laws of the country and we have to take action,” he said.

On Dec 1, a news portal reported that a gathering, believed to be of former CPM members, was held in Kajang to commemorate the 30th anniversary of the Hatyai Peace Accord signed between the Malaysian government and the CPM on Dec 2, 1989. - Bernama