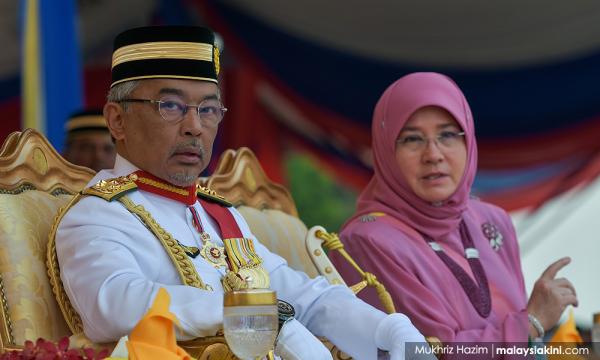 Yang di-Pertuan Agong arrives in UK for a special visit

The royal couple were met on arrival by High Commissioner of Malaysia to the United Kingdom, Mohamad Sadik Kethergany, and Vice Lord-Lieutenant of Bedfordshire, Colonel Chris Sharwood-Smith.

The Foreign Ministry in a statement said the visit signifies the importance Malaysia attached to the longstanding relations with the United Kingdom, in particular between the Royal Families of the two countries.

In London, Their Majesties have consented to attend a luncheon that will be hosted by Queen Elizabeth II at Buckingham Palace on Wednesday.

Al-Sultan Abdullah is also scheduled to hold a meeting with Lord Archbishop of Canterbury Justin Welby to exchange views on the multi-cultural and multi-religious society in both countries.

The statement added that Their Majesties itinerary also included a dinner with Malaysian diaspora in London and a visit to the British Library.

Al-Sultan Abdullah will also be given the honour to take the salute during the Royal commissioning parade of his son, the Tengku Mahkota Pahang Tengku Hassanal Ibrahim Alam Shah at the Royal Military Academy Sandhurst on Friday (Dec 13).

This special visit to the UK is Al-Sultan Abdullah's fourth after the United Arab Emirates, Saudi Arabia and Japan in June, July and October, respectively, since being sworn in as the 16th Yang di-Pertuan Agong in January.

Meanwhile, the Raja Permaisuri Agong will be visiting the World Association of Girl Guides and Girl Scouts (WAGGGS) World Bureau and the Associated Country Women of the World building in London.