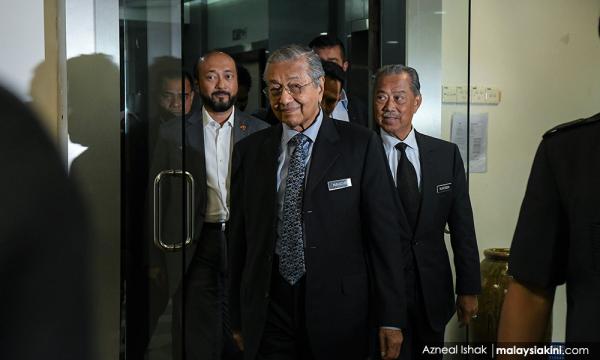 Speaking at a press conference at the Bersatu headquarters in Petaling Jaya, Mahathir said the issue of a reshuffle was raised during the party's supreme council meeting this afternoon during which they discussed the by-election.

Without committing to any time frame, Mahathir did not discount the possibility that the reshuffle might take place before the Asia-Pacific Economic Cooperation (Apec) summit to be hosted by Malaysia in November next year.

However, he said the government must take into consideration the constraints of making "radical changes" ahead of such an important international event.

"The members of the council gave their views based on their observations (of the by-election) and reports from independent parties not related to the party.

"We admit that there are several causes for the big loss, including the factor of our party being a young party and still immature and has yet to be well-organised in Tanjung Piai as well as in other places.

"There were also the issues of the cost of living, the economy and the fact that we could not distribute (monetary) assistance as much as the previous government had, and many other things.

The Pakatan Harapan chairperson, however, stressed that a decision on changes to the cabinet would not be done overnight as the ruling coalition would need to evaluate the performance of its ministers first.

Mahathir also mentioned that he did not have absolute power to decide on the composition of the cabinet as he would still need to consider the views of other Harapan component parties.

"The constraint is that even though I am the PM, I have to give consideration to the component parties. I cannot change or drop (ministers) just like that," he said.

Elaborating on the connection between a cabinet reshuffling exercise and the Apec summit next year, Mahathir said the government cannot risk preparation for the event with big changes in the government.

The importance of the event cannot be taken lightly as it involves international leaders including superpowers.

"I believe that there is still much more work to be done, and next year we will face a big thing - we are hosting the Apec summit.

"We cannot take this lightly as it is the most important international summit. That is why we need to make the utmost preparation.

"This prevents radical change from happening in the government."

Even by changing members of the cabinet, Mahathir pointed out that it might not be the solution to the Harapan government’s current problems.

He said it can even pose a bigger problem for them.

"A reshuffle by itself is not something that can improve the government's position.

"Even if we do it now, maybe we will have new faces, they would also take time. So the impact of these changes would take a long time. Maybe by that time (people would call) for another reshuffle."

Mahathir said he would need to look carefully into each minister and possible candidates to be introduced into the cabinet before deciding on any transfer, dropping or adding its members.