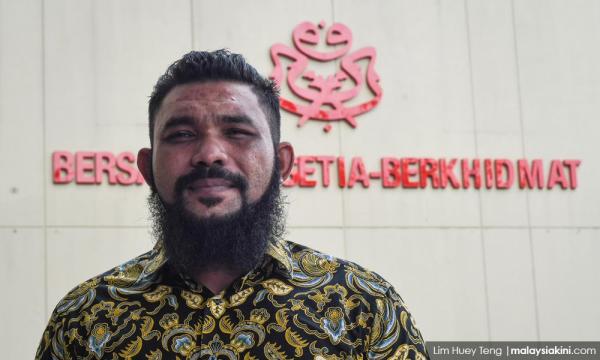 Better known as Papagamo, the controversial politician claimed that his statement was aimed at those from DAP.

“Almost all Malays know me. I am an ultra-Malay and anti-DAP.

“My enemy is DAP, be it Chinese, Malays or Indians from DAP. All of them are my enemies because they threaten to destroy the (federal) constitution...,” he added in a statement this afternoon.

However, Wan Muhammad said he does not harbour ill-feelings towards MCA and was among those who supported the idea of fielding an MCA candidate in the Tanjung Piai polls.

“I have been consistent in wanting MCA to contest and support the BN candidate Wee Jeck Seng.

“I support MCA because MCA is not like DAP. MCA is a long-time friend to Umno in developing this nation. MCA Chinese are not DAP Chinese. MCA Chinese have always agreed with the constitution,” he added.

The Umno leader also claimed that the clip being circulated in Tanjung Pia is not the full recording made in October last year.

“DAP is afraid to reveal the full recording because it was aimed at DAP.

“(At the time) a Chinese DAP senator raised the issue of removing the word Islam from identity cards. This was a sensitive issue that made me furious towards DAP. This issue proves DAP does not respect the constitution,” he added.

Wan Muhammad was referring to senator Nga Hock Cheh, who later clarified that his remarks were misinterpreted.

Nga said he never mentioned that a person's religious status should be dropped from the Mykad but stressed on the importance of a national identity.

Meanwhile, Wan Muhammad appealed to Chinese voters in Tanjung Piai to look at the real issues at hand.

“Will racial issues such as those played up by DAP continue to win? Or will more important issues such as the Pakatan Harapan government's failure to deliver its promises in the election manifesto as well as the failure of the federal and state governments to administer the economy or racial unity.

“Economic issues and the people's welfare are more important at this time for all of us be it Malays, Chinese, Indians and others,” he added.

In a related development, Umno Youth chief Asyraf Wajdi Dusuki (above) distanced the wing from Wan Muhammad's remarks of wanting to strip the Chinese and Indians of their voting rights.

Describing it as a personal opinion, he said this does not reflect Umno Youth's official stand.

“In fact, the video was recorded even before the Penyatuan Ummah and Muafakat Nasional agendas were discussed,” he added in a statement.

Asyraf said Umno Youth was among the first to support the BN leadership's decision to field an MCA candidate for Tanjung Piai.

Racial attacks against DAP is not okay

He added that Wan Muhammad's explanation that he was only referring to DAP was unacceptable as racial attacks against a political party do not make it any better.

"The explanation used to defend himself is disgusting.

"It is as if racial attacks against DAP members are allowed," said Syed Saddiq, who is also Pakatan Harapan Youth chief.

Syed Saddiq said gutter politics has no place and the future of the country lies on the shoulders of Malaysians regardless of race or religion.

"Harapan Youth will ensure the voting rights of all races or parties are supported and safeguarded.

"Our question to MCA is why have you remained silent over the statement nor has it been condemned by Umno Youth," he said.