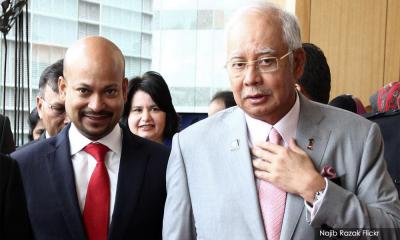 The trial against former prime minister Najib Abdul Razak and 1MDB ex-CEO Arul Kanda Kandasamy over the alleged tampering of the state fund's audit report will start next Monday as scheduled.

Kuala Lumpur High Court judge Mohamed Zaini Mazlan once again turned down an application for postponement of the trial, which had been set for Nov 18 to 29, and from Jan 13 to 17 next year.

Gopal Sri Ram, who is leading the prosecution team, told the court that they were hoping for postponement of the audit tempering trial as there are several ongoing cases involving Najib.

The cases include the 1MDB trial, which is at the prosecution stage, and the SRC International trial, for which Najib has been ordered to enter his defence.

Sri Ram said former 1MDB CEO Shahrol Azral Ibrahim Halmi is a key witness for the prosecution in the audit tempering case, and at the same time, he is also in the midst of testifying in the ongoing 1MDB trial against Najib.

"I cannot proceed as my witness is under cross (examination). I have to finish (with Shahrol's testimony first) as he is the one who can explain what unfolded.

"His evidence is of critical importance to the prosecution," he said.

There is also another case against Najib, where the former prime minister is facing six criminal breach of trust charges, together with former Treasury secretary-general Mohd Irwan Serigar Abdullah, involving RM6.6 billion.

The case had been set to be heard by High Court judge Mohd Nazlan Mohd Ghazali for 48 days starting Jan 6 next year.

However, Sri Ram added, the judge had indicated to the prosecution team that he was going to vacate the case to allow Najib's defence in the SRC trial to be heard first.

However, after hearing the application by Sri Ram, Justice Zaini said he was disinclined to give another adjournment for two reasons.

"If I were to vacate those dates, I would be hard-pressed to find new dates.

"Secondly, I take the view that the prosecution might be able to offer some (other) witnesses (before Shahrol). I would like to suggest calling other witnesses.

"In case the prosecution has exhausted all witnesses and it comes to Shahrol's (below) turn (to testify), we will take it as it comes.

"That much I am prepared to give," judge added.

Following this, Najib's counsel Farhan Shafee then raised the defence's concern over the tight timeline to prepare the accused's defence if the audit tempering trial commences as scheduled.

Farhan told the court that counsel from both sides in the SRC case would appear before Justice Nazlan this Friday over the defence's application to get documents and evidence from the prosecution.

He said subject to the outcome of that application, only then will they be able to gauge the time required to prepare for the defence.

Justice Zaini then told the defence lawyer to see the outcome of Friday's proceedings.

"If there is a need for more time, I assure you we will consider," he said.

This was the second time Justice Zaini had turned down an application to postpone the audit tempering trial.

The first was last month when he maintained the trial dates despite an application by DPP Mohammad Al-Saifi Hashim to vacate the dates as it may clash with Najib’s ongoing RM2.28 billion 1MDB trial.

Najib was charged with receiving gratification in the form of protection from ethical, civil or criminal actions against him as a public officer in relation to 1MDB by ordering the alteration of the draft audit report before it was presented to the Public Accounts Committee.

He is alleged to have committed the offence between Feb 22 and 26, 2016, at the Prime Minister’s Department in Putrajaya.

Arul Kanda was charged with abetting Najib in the offence during the same period.