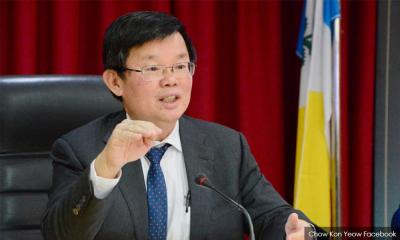 PSR a 50-year transformation plan, not short-term one: Kon Yeow

Contrary to criticisms that the Penang South Reclamation (PSR) project will only benefit the state on a short-term basis, Chief Minister Chow Kon Yeow today said that the project was a 50-year transformation plan.

Wrapping up the debates on Budget 2020 at the state legislative assembly in George Town today, Chow said the project was mooted to cope with the growing population of Penang.

"Where does this growth come from? From Penang itself or the neighbouring areas? Penang has to plan well for the state's future, taking into account this population growth," he added.

Expressing his concern about the situation, Chow said Penang needed an effective transportation infrastructure while noting there were not enough land banks for the future generations.

He refuted claims by certain quarters that due to the population density in the reclaimed PSR areas - the proposed three artificial islands in the south - they were not a proper place to live in.

"The population density for the reclaimed islands is similar to the one in Pengkalan Kota, which has 20,000 people per sq/km," said Chow, who is the assemblyperson for the constituency.

"Pengkalan Kota remains an attractive and delightful place to stay and visit, especially when you have a cun (able) elected representative," he quipped, saying he was referring to the area's MP (Padang Kota) MP, which is also him.

Chow urged PSR opponents to not compare Penang's population with other cities like London, saying it was unrealistic to do so.

Replying to Jason Ong Khan Lee (PKR-Kebun Bunga) who asked whether the PSR would be a public area or privatised, Chow said the matter depended on the deals inked between the state and investors.

PSR, a component of the RM46 billion Penang Transport Master Plan, was a state government project where the state-owned all the reclaimed land, Chow said.

It is learnt that 30 percent of the land will be developed and sold to cover the cost of the PTMP which includes a 19km, 27 station light rail transit system from Bayan Lepas to Komtar.

"The state government will determine the master plan for the PSR, especially those related to development and public infrastructures," he said.

"Plots will be sold to interested quarters depending on the type of development determined by the state," he added.

"The income derived from the sale of land will be used to develop Penang, including paying the cost for the transport master plan."

"New investment projects in the area will continue to pour in and we will be able to realise the dreams for the people to live in a clean, green, safe environment, equipped with proper transportation, better education and work opportunities," said the chief minister.

Currently, the state has to comply with 72 conditions imposed by the Department of Environment (DOE) as stated in its conditional approval of the Environmental Impact Assessment (EIA) report for the PSR project.

Chow also addressed the concerns over the project especially by fisherfolks and NGOs, admitting the PSR scheme may have a negative impact on the environment and the livelihood of fishermen.

However, various measures have been proposed to mitigate this impact, Chow assured.

“Experts and consultants have deliberated on the proposals, which have gone through technical evaluations by various departments prior to the conditional approval from the DOE,” Chow stressed.