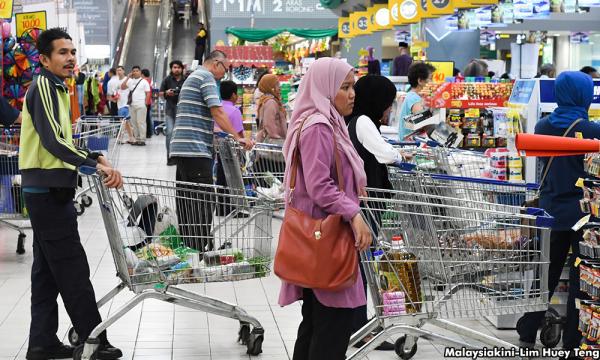 Director of Financial Surveillance Department Qaiser Iskandar Anwarudin said it was evidenced by the improvement in loan impairment ratio to 1.3 per cent compared to the five-year average of 1.5 per cent as well as a low portion of disposable income for loan repayment of 36 per cent

"On aggregate, households continue to be resilient with their financial position remains intact," he said in a briefing in Kuala Lumpur.

He said Malaysia’s household debt level had moderated to 82.2 percent of the gross domestic product (GDP) from 2015 peak of 86.9 percent, but was still one of the highest in Asia and even among some high income nations such as the US (75 percent), Hong Kong (73.2 percent), Japan (58.2 percent) and Singapore (53.6 percent).

However, he said two-thirds of household borrowings was for wealth accumulation primarily to buy homes and securities, including Amanah Saham Bumiputera (ASB) units.

“More than half of household debt is acquired for housing mainly for the purchase of affordable homes with 84 percent of the loans provided by banks,” he said.

Nevertheless, he said certain segments of the households continued to be more vulnerable to shocks particularly among those earning below RM5,000 per month due to their low take-home pay after deductions for existing debt obligations and expenditure.

“About two-thirds of total bankruptcies due to consumption loans, mainly among borrowers with an income of less than RM5,000 a month,” he said.

Therefore, he said BNM would continue efforts to secure the wellbeing of households over the long-term by collaborating with industry players and relevant agencies.

He said this included enhancing the financial literacy among Malaysians by establishing financial education programmes and promoting responsible financial behaviour and a healthy attitude towards financial management.

At the same time, he said BNM would continue to safeguard households from financial hardship due to excessive debt burden and defaulting on their repayments throughout the entire loan tenure.

He said BNM would also safeguard households from foreclosure that would undermine the objectives of homeownership.