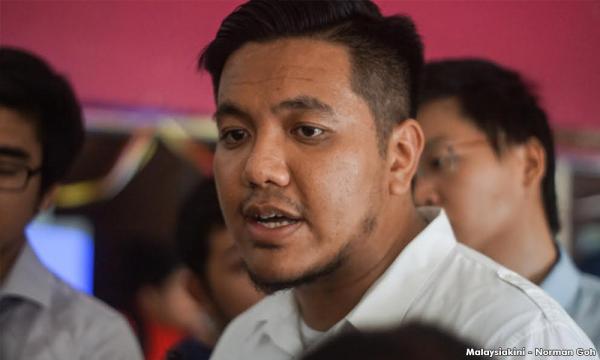 State exco refutes 'Penang gov't like board of directors' claim

A Penang state executive councillor has disagreed with activist Ravinder Singh who remarked that the state government was more like a "board of directors" instead of parents to its citizens when it comes to deciding which project is beneficial to the state.

In a statement today, state exco for health and agriculture Dr Afif Bahardin (above) said he prefered the "parent-children" metaphor used by a former fisherman who spoke at a forum organised by NGO Anak Pinang.

"This is not because we get to dictate things, rather as parents there will be times when we have to make tough decisions, riddled with risks and uncertainties, to ensure the long-term prosperity of our family," Afif said.

"Of course, it usually comes without a shortage of critics who may disagree with us," he added. "We are aware of the fact that sometimes the right decisions are also unpopular ones.

"Nevertheless, we must persevere and balance between the needs of everyone in the state, regardless of race, religion, be it for those on the island or mainland and even, well, especially the fisherfolks," he stressed.

"Polling sentiments do not determine our decision-making, it is the wellbeing of all Penangites that guides our decisions. I hope this clears the air."

Afif was responding to Ravinder's article titled, "A former fisherman advising other fishermen to follow him" in which the latter took offence at the analogy of "parent and child" used by a former fisherman to describe the relationship between the state and its citizens at the talk organised by Anak Pinang.

In supporting the projects, Nasarudin at the talk criticised the state as "weak parents" for delaying the transport initiatives due to objections from certain quarters.

Meanwhile, In his article published in Aliran on Oct 15, Ravinder wrote: "They (the state government) do not give or make things for their children that would harm them physically, mentally, emotionally or in any other way."

Other activists like Sahabat Alam Malaysia president Meenakshi Raman was also offended by the analogy, saying it was "extremely patronising and condescending" of the critical and independent views of civil society on the PSR and PTMP.

Afif said the state government was very clear on its goal and agenda in promoting economic growth and ensuring long-term prosperity for most of the residents in Penang.

"We try to achieve this while ensuring that minority groups, those who will bear the brunt of such trade-offs, in this case, the fishermen, are protected," said Afif, who is also Seberang Jaya assemblyperson.

"From fisherfolk who are worried about their livelihoods and concerns from civil societies, we also have to deal with political elements that are spinning this into a racial issue by playing the Melayu hilang tanah (Malays have lost their land) card," he added.

" We are very much aware of the challenges that we will have to face," said Afif, adding there were times when the state must make difficult decisions in deciding on trade-offs to gain benefits for the longer term.

He said the state government did not merely reclaim land for the sake of reclaiming.

"Instead, it is part of a much larger goal of building a comprehensive transportation network and industrial infrastructure for Penang," said the former PKR deputy youth chief.

"Of course, we are aware that these fishermen will be the group that will bear the brunt of this trade-off.

"Thus, it is our policy to ensure that they will be not left out from this development, whether in terms of ensuring the sustainability of their fishing grounds or providing a better future for them by proposing an alternative means of making a living apart from just fishing," he said.

Describing Ravinder's remarks as "simplistic", Afif also refuted the former's claim that the Ministry of Agriculture had stated that the project would ultimately destroy the fishing habitat of the area.

Afif said he found this claim misleading because the actual statement by minister Salahuddin Ayob meant that the project would "affect" (menjejaskan) the area and not destroy it.

"We took note of the minister's recommendations for us to undertake several mitigating measures to balance the effects on the fishing ecosystem while at the same time pushing for compensation to those who are affected," Afif said.

He claimed that less than 20 percent of fishing boats currently operate within the area of the reclamation's footprint.

To ensure that fisherfolks can continue their activities, a buffer zone of 250 metres from the shoreline is to be gazetted as a navigation channel, followed by dredging work (deepening of the channel) so that their boats will have easier access to the open sea, Afif added.

Additionally, four floating jetties are to be built throughout the channel which is an upgrade from the current fishing infrastructure, he stressed.

Afif said the state was addressing the concerns of the impact of reclamation on the fishing ecosystem by undertaking various ecological offset programmes.

"These include the installation of artificial reefs in Pulau Rimau and Pulau Kendi, the setting up of eco-engineering sea walls throughout the south Penang shoreline and mangrove reforestation projects in Tanjung Tempoyak and Pulau Betong.

Afif also claimed that the monthly catch for fisherfolks in the southern post of the island has been declining for the past 10 years.

While it is great to romanticise their (the fisherfolk's) work, Afif said the data showed a decline in catch over a decade.

He cited a Social Impact Assessment (SIA) study conducted at the affected area in 2016 which showed that less than eight percent of fisherfolk today brought in a monthly catch of more than 200kg, a drop from a whopping 58 percent 10 years ago.

"This clearly shows that the decline is independent of the reclamation effects," Afif said.

"The study also points out that only one-fifth of the fisherfolk have their children inheriting their livelihood or being part of their fishing operation," he added.

"This points out the difference between romanticising a fishermen's work to the reluctance of the younger generation to be a fisherman," he noted.

Spanning 1,820ha, the PSR involves the creation of three artificial islands on state land with 30 percent of the area being developed and sold to cover the cost of the RM46 billion PTMP.