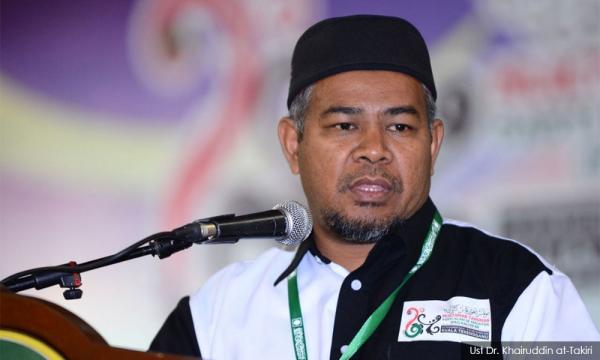 A PAS lawmaker has appealed to the rulers to issue a decree not to question the social contract in the wake of two DAP politicians' remarks on the matter.

Apart from this, he urged the police to investigate and arrest DAP leaders who question the social contract, claiming that such actions have the potential to create unrest in the nation.

“I am deeply concerned about the actions of these DAP leaders who dispute the social contract, which is the backbone of the nation's independence,” he said, according to Harakah Online.

Khairuddin noted how Bukit Gelugor MP Ramkarpal Singh, when criticising the recent Malay Dignity Congress in the Dewan Rakyat, had stated that the social contract does not exist.

“He (Ramasamy) had said 'the nebulous social contract was more a figment of Zainal’s imagination than anything else',” he added.

Yesterday, the MPN said Zainal's remarks on the concept of the social contract was “historically accurate.”

According to Khairuddin, these statements proved that Harapan's promise to defend the Federal Constitution with regard to the rulers, Islam, national language and the special position of the Malays and bumiputera was fallacious.

“DAP is insolent for opposing the decree of the Malay rulers during the Conference of Rulers in 2008 that it is inappropriate to dispute, question, review or amend the social contract,” he said.

He added that on August 6, 2018, Perak ruler Sultan Nazrin Shah had also cautioned all quarters not to question the constitution.

Experts: Social contract not in constitution

In March this year, experts quoted by the Star Online pointed out that the social contract does not appear in the Federal Constitution.

Moderation advocate Muhammad Tawfik Ismail said there was no such phrase as a “social contract” during the drafting of the constitution.

Tawfik is the son of former deputy prime minister Dr Ismail Abdul Rahman, who was a member of the delegation which negotiated the terms of Malaya's independence in London.

While the constitution sought to address three issues – non-Malays' citizenship, the national language and the special position of the Malays, he said it did not explicitly outline a social contract.

According to Tawfik (photo), the late politician Abdullah Ahmad coined the phrase in 1986 during a speech in Singapore, where the latter said: “The political system of Malay dominance was born out of the sacrosanct social contract which preceded national indepen­dence.”

Due to this, Abdullah said the Malaysian political system must safeguard the Malay position and meet the race's expectations.

After the term was appropriated by politicians, Tawfik said: “People have been talking about the social contract as though it was a real thing but Abdullah is a politician all the way. (Social contract) is actually a fiction.”

“As far as the political parties are concerned, I can safely say that not one MP has defended the Constitution as they should and as they have sworn to do,” he added.

Similarly, public policy analyst Lim Teck Ghee said Abdullah's notion of a “social contract” was often repeated by BN and their supporters, which morphed into an unquestionable truth in public consciousness.

Both Tawfik and Lim were speaking at a forum titled “Social Contract and Its Relevancy in Contemporary Malaysia.”