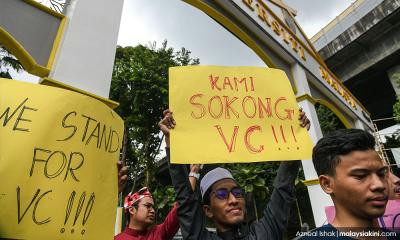 A group of NGOs today held a protest in front of the Ar Rahman Mosque in front of Universiti Malaya (UM) to express their support its vice-chancellor Abdul Rahim Hashim whom they believe is the victim of a targeted plot.

Referring to the convocation ceremony protest by graduate Wong Yan Ke, Gabungan Pelajar Melayu Semenanjung (GPMS) Penang representative Ahmad Yakcoob claimed that Wong was acting on behalf of a plot orchestrated by the DAP who he claimed became upset when "Malays begin demanding their rights."

“Who is behind Wong?"

“And (activist) Siti Kasim and the DAP Youth. They also pressured the VC to resign. This is about UM's honour which UM students must defend. Shame on you guys", he said.

Around 20 police officers and 20 members of the media were also present.

"We know that (the Malays asking for their rights) makes the non-Malays angry. That's why we want UM students to rise up and defend their VC's dignity," said Ahmad Yakcoob further.

Sophian Mohd Zain, a representative of the NGO Surplus, also questioned the actions of some people who criticised the holding of the Malay Dignity Congress, which in his opinion, should not be disputed.

"We are born Malay people. Our religion is Islam. We are guaranteed our rights in the constitution, in Article 153. We are Malays! What's the problem? "

He slammed Wong's protest and his exhortation that this land was "tanah Malaysia" (Malaysian land).

Meanwhile, National Science representative Zambri Mohd Isa cited an incident in 2015 when a supervisor was suspended for taking pictures on stage during the convocation ceremony.

Therefore, he said, Wong should not be excluded from punitive action.

“That youngster was suspended just for selfies. But this Wong Yan Ke was so rude. Action must be taken. If there is no action, it will cause many more young people, graduates, (to be) disrespectful and rude," he said.

Speaking to reporters after the representatives had finished speaking, Alif Anas said he reminded the organisers that they were not racist only that they did not accept rude behaviour and disrespect to academic freedom.

"This is not a racial issue but an issue of rude behaviour," he said.

Convocation protests not proper but no need to revoke degrees: Syed Saddiq