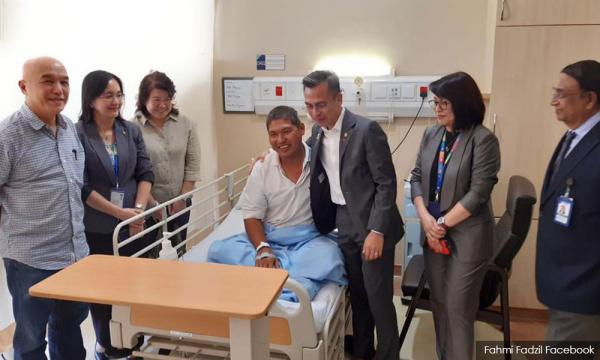 Lembah Pantai MP Fahmi Fadzil last month found himself in the centre of a social media storm after he joked about a run-down car on Twitter.

One social media user who claimed the driver was a friend who works as a grab food driver to take care of his parents had chastised Fahmi, stating that an MP with high salary should not be laughing at other people's poverty.

It turned out that the user was just another internet troll pulling Fahmi's legs, but the tweet gained widespread attention.

But the social media storm eventually led to an unlikely meeting between Fahmi and the car driver, 39-year-old Yap Chi Hoe, who, the MP would later learn, was facing vision troubles that could potentially lead to blindness.

"From our conversation, I learnt that he has vision problems which could lead to a total loss of sight, so I tried my best to seek help for him.

"Alhamdulillah, I am thankful to the management of Pantai Hospital Kuala Lumpur which agreed to assist him pro bono as part of their corporate social responsibility.

"The eye specialist found that he faced chronic retinal detachment in one eye while another needed laser treatment," he said.

Fahmi, who visited Yap at the hospital today, said the surgery was successfully carried out yesterday, and the latter is expected to be discharged as there are no complications.

"God-willing, Yap will be given some follow-up treatment, and I believe his eye condition will improve and he can build a better life," he said.

Fahmi said he was able to track down Yap in Klang through the help of friends. However, he said Yap was initially reluctant to meet him.

"I said I wanted to apologise, but he was unconvinced and I assumed the case was closed.

"But a few days later, Yap contacted me and agreed to meet. I was able to hear his story," he said.

He added that Yap shared that he didn't know the social media user who "defended" him nor was he a grab driver. Both of Yap's parents are also no longer around.

Fahmi said Yap's car was in a beat-up condition as he was involved in an accident where a container lorry hit his vehicle from the rear on Sept 8.

He said as Yap was in a hurry for an appointment, he had continued driving the damaged vehicle anyway instead of having it towed.

"Yap's vehicle was considered a total loss and the insurance company will assist him fully," he said.