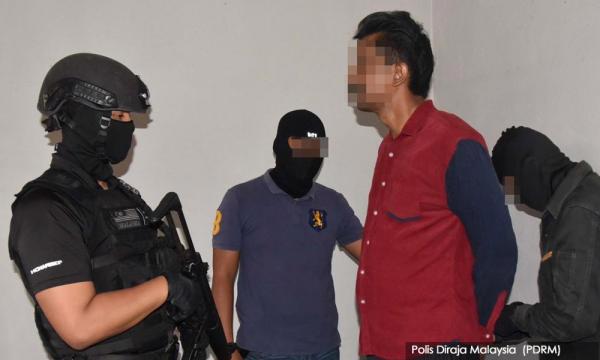 YOURSAY | ‘Doubts remain as to the arrested persons were really attempting to revive LTTE.’

Keropok Ikan: PKR president Anwar Ibrahim did the right thing by not jumping on the bandwagon by simply supporting the police action while criticising those arrested in connection to the Liberation Tigers of Tamil Eelam (LTTE) organisation.

Anwar knows from personal experience what it feels like to be raided and arrested by a police team clad in balaclava when a simple request to turn up at the police station will do.

Sniper: Even at the height of LTTE activities during the Sri Lankan civil war, nothing happened in Malaysia.

Now, suddenly people who attend dinner in memory of some Sri Lankans are being arrested.

Previously, Indian Malaysians were accused of supporting Indian Prime Minister Narendra Modi. When that accusation did not stick, the issue of LTTE has cropped up. This new accusation will not stick for long either.

Anonymous For Fear Of Persecution: Let’s be clear that LTTE is not an Indian organisation.

LTTE had comprised of Sri Lankan Tamils, also known as Ceylonese, fighting for an independent homeland in Sri Lanka.

But the irony is that LTTE has been destroyed by the Sri Lankan government and does not exist anymore. So what were those people arrested in Malaysia and said to be LTTE-linked fighting for? Is this a political stunt?

Orang Biasa: From 1948 until now, the Singhalese government of Sri Lanka continuously practised oppression and tyranny against the Tamils there.

White vans were used by the government to collect young Tamils who were never seen again.

They committed mass murder of Tamils detained in the Welikade prison, they committed genocide of Tamils in Mullaitivu in February 2009 and imprisoned 282,000 terror-stricken survivors for 10 months in Chettikulam after carrying out the genocide.

All these are recorded in the special report of the UN panel on accountancy in Sri Lanka published on the UN website on March 31, 2011.

It is not right to arrest someone just for opposing the oppression and tyranny against Sri Lankan Tamils by their own government.

Anonymous 770241447347646: If the police had arrested the individuals linked with LTTE activities after much surveillance and evidence gathering, why are they being held under the Special Offences (Security Measures) Act (Sosma)?

Those arrested should be brought to court and charged. They should be given the right to defend themselves.

The use of Sosma raises many unanswered questions. Was the evidence gathered by police not enough to charge them in court? Is Sosma used to gather evidence by using pressure or some other tactics to make them talk while under detention?

Millions of taxpayers’ money were used to train the police force to improve their investigative skills. By now, the Royal Malaysian Police Force (PDRM) should be in a position to immediately charge whoever they arrest after gathering the evidence beforehand.

It is improper for them to arrest an individual first under Sosma, which allows detention for up to 28 days without trial, and then investigate the crime committed.

Ravinder: Malaysians were earlier told that the use of Sosma would be put on hold pending repeal. However, it is being used to detain the LTTE-linked suspects.

Everyone is familiar with the slogan that “one is not guilty until proven guilty in a court of law”. Detaining people is a form of punishment. The Penal Code is a very comprehensive law that takes care of all forms of unlawful acts. Why is it not being used?

No rational person will believe that those detained are guilty unless they are charged, with the evidence produced in court, so that the suspects can defend themselves.

When they are detained without being charged, they are not being given the right to defend themselves. It is an unconstitutional action.

Amateur: Indeed, doubts remain as to the arrested persons were really attempting to revive LTTE, which had been defunct for the past 10 years.

If they were really planning to operate an organisation like LTTE in Malaysia, are they any worse than the Malaysians who voluntarily left to the Middle East to join the Islamic State (IS) terrorist outfit?

What will the authorities’ action or inaction be when the IS-linked Malaysians return home?

Anonymous 1569342009903: The rakyat need to petition our respective MPs to bring up the abolition of Sosma in the Parliament.

Although it was former prime minister Najib Abdul Razak who introduced Sosma, it is wrong to blame him for the current predicament.

Najib merely replaced the Internal Security Act (ISA), under which a person could be detained for up to two years without trial, with Sosma, which as the lesser evil only allows detention for 28 days.

Let’s not forget that ISA was widely used by Dr Mahathir Mohamad during his first tenure as prime minister, including to harass his political rivals.

Regardless if it is ISA or Sosma, both needs to be abolished as detention without trial is just plain wrong.

Lionking: Sosma should be used against anyone who swindled millions or billions of public funds.

Those who are allegedly corrupt and stole from the rakyat are not in detention, but walking free and attend court trials in expensive suits.

They have committed treason against the country. Concerned citizens should urge their leaders to request the police to put anyone who has committed white-collar financial crimes, to be investigated under Sosma.

YTMQ: During the police press conference, Bukit Aman Special Branch's Counter-Terrorism Division chief Ayob Khan Mydin Pitchay said, "It is like Palestine. You sympathise with the people there, but you are not going to promote Hamas here."

Knowing fully well that those who had been promoting Hamas' cause had never been arrested in Malaysia before, Ayob Khan had clearly practised double standards based on his words.

In fact, by Ayob Khan's own words, any kind of support for Hamas would mean immediate detention without trial under Sosma.

If it is not going to be used fairly, Sosma must be repealed. Period.

Orang Biasa: The Malaysians arrested for being linked with LTTE did not take up arms to fight in the war against oppression and tyranny in Sri Lanka, which ended in 2009.

The LTTE was hero-worshipped by Tamils all over the world. Those that were detained simply raised the Tamil Eelam flag and sang spirited songs. These are not crimes by any stretch of the imagination.