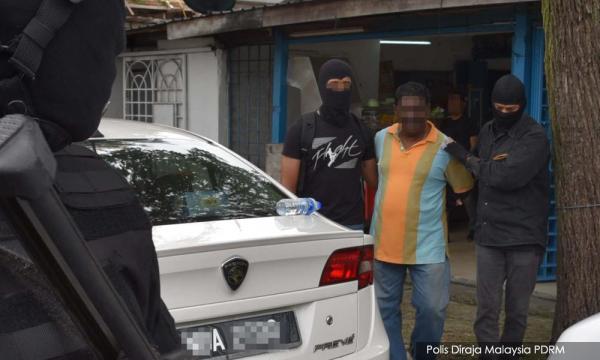 ADUN SPEAKS | The counter-terrorism unit of the Malaysian police said they have evidence that the two DAP state assemblypersons and five others they arrested in a special operation yesterday, Oct 10, have links with the Liberation Tigers of Tamil Eelam (LTTE).

All of them are being held at the Bukit Aman police headquarters for 28 days under the Special Offences (Security Measures) Act (Sosma) for further investigation.

On the arrests of the two elected representatives, Malacca state executive councillor G Saminathan (left, in photo below) and Seremban Jaya assemblyperson P Gunasekaran (on right), the police revealed that they took part in an event last November where LTTE heroes were glorified and pamphlets and brochures were distributed to the participants.

Four of the five others arrested were a taxi driver, a junk material trader, a restaurant owner and a technician.

Among them, two were involved in an attack against the Sri Lankan High Commissioner in 2016 at the KLIA airport.

Apparently, there were plans to attack the Sri Lankan High Commission in Kuala Lumpur.

The police are confident that they have evidence linking the arrested with the attempt to revive the LTTE in Malaysia.

If this is so, why arrest them under Sosma? They can be charged under the Penal Code, which provides bail, legal representation and evidence will have to be scrutinised in the court of law.

As I have commented numerous times in the past, there is no such thing as the LTTE today.

It was decimated in 2009 during the final stages of civil war in Sri Lanka, with many of its top leaders having been killed in the war.

Sympathy for Tamils in Sri Lanka does not tantamount to the support of the defunct organisation.

Nostalgia in the form of war memorials for the innocent victims does not translate as links with the LTTE.

Police allegations that some of the individuals arrested were trying to revive the LTTE do not make any sense at all.

Why is there a necessity to revive a dead organisation to take up a cause in a distant land, Sri Lanka?

The only crime of the two DAP elected representatives was their participation in a war memorial in Malacca last year.

Is grieving for the dead a crime?

Are grieving and paying respect for the dead in the Sri Lankan civil war a crime?

Can’t the Tamils empathise with the sufferings of their kind in Sri Lanka, victims of ethnic genocide?

Is it all right for Malay-Muslims to empathise with Palestinians, Rohingyas, but Tamils are not allowed to identify with their fellow Tamils?

If the police have evidence of imminent attack by some of those arrested, charge them in an open court, backed with evidence and witnesses.

The police do not have the luxury of having evidence and yet be reluctant to prosecute them in an open court.

Why use the dreaded Sosma that completely puts the detainees at the mercy of their captors?

Didn’t the new Pakatan Harapan government promise Malaysians that Sosma and other obnoxious legislation will be things of the past?

There no such thing as attempts to resuscitate the LTTE in Malaysia; it does not make sense at all. Extremely far-fetched, perhaps a figment of the imagination.

Police arrests did not take place in isolation. Over the last few years, there has been a systematic campaign through social media to accuse certain individuals who were opposed to the fugitive Zakir Naik as the work of LTTE supporters.

Some prominent individuals have gone to the extent of accusing the government of being silent on the LTTE supporters but hard on those who sympathised with ISIS or Islamic State.

Moreover, the sliding support for Bersatu among the Malays has been of concern to those in power. The recent Malay dignity congress highlighted the fact that the government gave in too much to the non-Malays.

Thus, the recent arrests of those with links with the LTTE are a political move to convince and assure sections of the Malay right-wing that the government is fair in cracking down on troublemakers, irrespective of their background.

P RAMASAMY is Deputy Chief Minister II of Penang and the state assemblyperson for Perai.