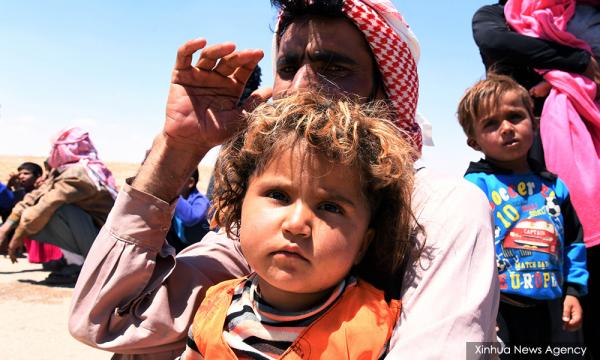 Kurds – a people that are spread across four nations

Turkish forces are poised to advance into northeast Syria after US troops began vacating the area, in an abrupt policy shift by President Donald Trump widely criticised in Washington as a betrayal of America’s Kurdish militia allies.

Ankara says it plans to create a “safe zone” to resettle millions of refugees currently living on Turkish soil. This would then serve as a buffer against what Turkey sees as its main security threat in Syria - Kurdish YPG fighters who Ankara says are linked to militants waging an insurgency inside Turkey.

Turkey, Syria, Iraq and Iran all have large Kurdish minorities seeking varying degrees of autonomy from central governments after decades of repression.

This is an overview of their status. For graphics on where Kurds live, click here.

The Kurdish ethnic minority, mainly Sunni Muslims, speaks a language related to Farsi and lives mostly in a mountainous region straddling the borders of Armenia, Iraq, Iran, Syria and Turkey.

Kurdish nationalism stirred in the 1890s when the Ottoman Empire was on its last legs. The 1920 Treaty of Sevres, which imposed a settlement and colonial carve-up of Turkey after World War One, promised them independence.

Three years later, Turkish leader Kemal Ataturk tore up that accord. The Treaty of Lausanne, ratified in 1924, divided the Kurds among the new nations of the Middle East.

Before Syria’s popular uprising erupted in 2011, Kurds formed 8-10 percent of the population.

The Baathist state, championing Arab nationalism, had deprived thousands of Kurds of citizenship rights, banned their language and clamped down on Kurdish political activity.

During the war, President Bashar al-Assad focused on crushing mainly Sunni Arab rebels with the help of Russia and Iran, turning a blind eye as Kurdish fighters carved out self-rule across the north and east.

Kurdish forces have emerged among the biggest winners, controlling about a quarter of the country — territory rich in oil, water and farmland. It is the biggest chunk of Syria not in state hands, now with its own forces and bureaucracy.

Assad has said he will recover the northeast, but the two sides have kept some channels open.

The Kurdish YPG militia’s power grew after joining forces with US troops to seize territory from Islamic State. While the US deployment has provided a security umbrella that helped Kurdish influence expand, Washington opposes the autonomy plans.

Syrian Kurdish leaders say they do not seek partition but rather regional autonomy as part of Syria. Faced with the threat of a Turkish attack, the Kurdish-led authority in northern Syria has declared a state of “general mobilisation” across north and east Syria.

Kurds form about 20 percent of the population.

The Kurdistan Workers Party (PKK) took up arms against the state in 1984, waging an insurgency for autonomy in Turkey’s largely Kurdish southeast. Since then, more than 40,000 people have been killed in the conflict.

PKK leader Abdullah Ocalan was captured in 1999, tried and sentenced to death. That was later reduced to life in prison after Turkey abolished the death penalty.

Turkish President Tayyip Erdogan has removed restrictions on using the Kurdish language. The government held talks with Ocalan, who is in jail on an island near Istanbul, in 2012, but they broke down and the conflict has revived.

The United States, the European Union and Turkey classify the PKK as a terrorist organisation.

Turkey’s military has often struck targets in Iraq’s Kurdish region near the PKK’s stronghold in the Qandil mountains.

Erdogan has said he will crush Syria’s YPG, which Ankara sees as a branch of the PKK, and has sent troops into northern Syria to mount offensives rolling back the Kurdish fighters.

Late President Saddam Hussein’s rule targeted Iraqi Kurds in the late 1980s when chemical gas was used, villages were razed and thousands of Kurds were forced into camps.

Their region has been semi-autonomous since 1991, has its own regional government and armed forces, but still relies on the Baghdad central government for its budget.

When Islamic State militants swept through much of northern Iraq in 2014, Kurdish fighters exploited the collapse of central authority to take control of Kirkuk, the oil city they regard as their ancient regional capital, as well as other territory disputed by Baghdad and the Kurdish north.

Iraqi government forces and Kurdish Peshmerga fighters, with US backing, defeated Islamic State which had captured swathes of northern Iraq.

Iraq’s Kurds held a referendum on independence in September 2017, which backfired and triggered a regional crisis in the face of opposition from Baghdad and regional powers.

The vote prompted military and economic retaliation from Baghdad, which retook the territory seized by Kurdish forces since 2014. Ties have since improved, but tensions remain over oil exports and revenue-sharing.

Kurds form about 10 percent of the population.

In 2011, Iran pledged to step up military action against the Party of Free Life of Kurdistan, a PKK offshoot that has sought greater autonomy for Kurds in Iran.

Rights groups say Kurds, along with other religious and ethnic minorities, face discrimination under the ruling clerical establishment.

The elite Revolutionary Guards have put down unrest in the Kurdish community for decades, and the country’s judiciary has sentenced many activists to long jail terms or death. Iran’s military has demanded Iraqi authorities hand over separatist Kurdish dissidents stationed there and close their bases.

Turkish operation may redraw map of Syrian war once again