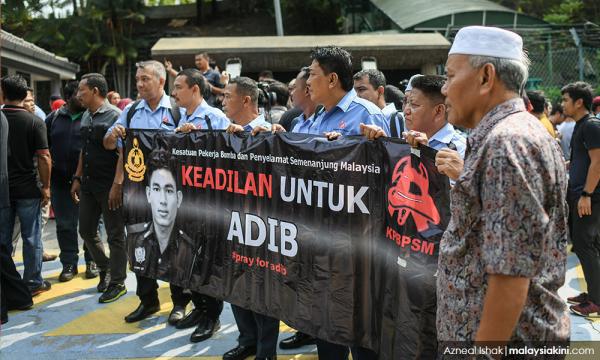 Inquest ruling: What politicians are saying

The death of firefighter Muhammad Adib Mohd Kassim last December has been heavily politicised, some to fan racial and religious tensions.

With the Coroner's Court ruling today that Adib died due to criminal acts and police inaction, politicians are again weighing in on the matter.

Malaysiakini sums up what they're saying.

PAS urges the police to immediately form a special investigating team and re-open the case's investigation paper and get to the bottom of it.

PAS is confident that the police, with the help from all those who want justice upheld, especially for a civil servant who died in the line of duty, can arrest and drag those involved to face justice.

PAS also urges contempt proceedings against the attorney-general be continued without disturbance so that justice can be upheld without fear or favour.

The authorities must review standard operating procedures and fix any weaknesses. We do not want this case to repeat itself.

I hope everyone will stay calm and leave it to the authorities to do their work.

The attorney-general must resign if he is a responsible person.

I beseech the Yang di-Pertuan Agong to intervene in this case and sack Tommy Thomas.

I welcome the announcement by IGP Abdul Hamid Bador, that the Royal Malaysian Police will review the case, and I hope the PDRM together with the Attorney-General can determine the action that needs to be taken next.

The individuals involved in this crime that resulted in the death of the late Adib must be brought to justice.

Justice for the late Adib and his family is justice for all Malaysians.

At the same time, I hope everyone will be patient and not take any illegal actions.