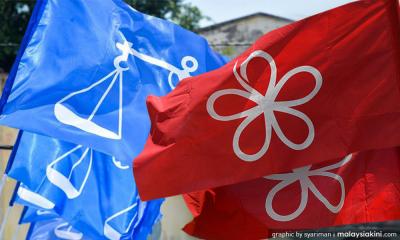 The by-election for the Tanjung Piai parliamentary seat in Johor is to be called following the death of its incumbent, former deputy minister in the Prime Minister's Department Dr Md Farid Md Rafik.

The Election Commission (EC) received the formal notice on the vacancy after Farid’s death last Saturday. A special meeting will be held by the EC in Putrajaya next Tuesday to decide on the dates for the nomination, campaigning period and voting day.

Malaysiakini has identified six key areas that will the coming by-election.

(1) After winning five by-elections and losing three others, will Pakatan Harpan retain the Tanjung Piai seat?

This by-election will be the ninth after the May 9, 2018, general election (GE14). The previous eight by-elections were held in Sungai Kandis, Balakong, Seri Setia, Port Dickson, Cameron Highlands, Semenyih, Rantau and Sandakan.

Harapan won five of the eight by-elections, losing three of the seats contested to BN - in Cameron Highlands, Semenyih and Rantau.

Among Harapan's three defeats, the Semenyih by-election was the most significant as it won the seat in GE14 but failed to secure it just 10 months later.

The three successive victories had strengthened the collaboration between Umno and PAS. Harapan's political fortune was later turned around - in the Sandakan by-election.

After over a year in power, Harapan's honeymoon is certainly over. The result of the Tanjung Piai by-election will show the latest support for Harapan.

(2) After the official Umno-PAS collaboration, where are the Malay votes going to?

Racial and religious issues have been constantly raised by Umno and PAS leaders after GE14. From the row over the International Convention on the Elimination of All Forms of Racial Discrimination (Icerd) to the death of fireman Muhammad Adib Mohd Kassim and the introduction of Jawi khat in primary schools, leaders from the two parties kept criticising Harapan for not protecting the Malays and Islam. This narrative has put Harapan in a position of weakness.

About 57 percent of the voters in Tanjung Piai are Malays. Umno and PAS are expected to use racial and religious issues in their campaigns for this parliamentary seat.

Md Farid only secured the seat with 47.28 percent of the votes cast while the total votes for BN and PAS was 52.7 percent. What would have happened if PAS did not contest and its supporters had backed BN instead?

After winning three successive by-elections, BN and PAS on Sept 14 this year signed a charter formalising their cooperation. As the first by-election after the official collaboration, winning Tanjung Piai would boost the alliance's position.

Tanjung Piai comprises 42 percent of Chinese voters and one percent Indian voters. The Chinese community has also been plagued with identity politics since the last election.

Some Chinese voters are dissatisfied with how the government handled the issues of Icerd and khat. The delay of Harapan's promises such as the recognition of the Unified Examination Certificate (UEC) has also angered them.

However, Md Farid had a good reputation among the locals, and this could reduce the loss of Chinese votes.

Tanjung Piai used to be a traditional MCA seat and has been a stronghold of this BN member for decades - until it was defeated in GE14. The former president of MCA, Ong Ka Ting, was the MP for Tanjung Piai from 2004 to 2008.

Ong shifted to contest in the Kulai parliamentary seat during the 2008 general election, and Wee replaced him in Tanjung Piai. Wee won two terms in 2008 and 2013, and after GE13, Wee was appointed as deputy minister of youth and sports.

Wee has declared that he is ready to contest in Tanjung Piai again.

However, Tanjung Piai Umno chief Jefridin Atan has demanded that the BN leadership hand the seat to Umno. He also blamed MCA for refusing to give up its traditional constituency in GE14, causing BN to lose the seat.

However, MCA claimed that it had made way for Umno several times in the past to contest in Tanjung Piai.

There is also the possibility that the current disgruntlement among Chinese voters could lead to a low voter turnout in the by-election.

Tanjung Piai has been DAP's traditional constituency in the past but the party made way for Bersatu to contest the seat in GE14. It is expected that Bersatu will continue to contest in the by-election.

The political wrestling within Johor Bersatu is continuing. The fractions within the party in the state became more visible after the replacement of the Johor menteri besar.

New Menteri Besar Sahruddin Jamal was not appointed to be the Johor Bersatu chief. Instead, Tebrau division chief Mazlan Bujang, who was dropped from the state executive council last week, was tasked with helming the state chapter.

It is also a challenge for Johor Bersatu members to set aside their differences and cooperate with one another during the campaign for this by-election.

Harapan managed to win 18 of the 26 parliamentary seats in Johor in the last election, which was a huge contribution for the coalition to capture Putrajaya.

Tanjung Piai will be the first by-election to take place in Johor. There are 53,528 voters in Tanjung Piai and a large proportion of the residents work in the agriculture, fisheries and tourism sectors.

Last year, Mahathir said that he wanted to scrap the monthly cost-of-living allowance provided for fishermen but the Agriculture and Agro-based Industries Minister Salahuddin Ayub later clarified that the allowance scheme would continue and that the government even intended to raise the amount in 2020.

Last June, the Economic Affairs Ministry channelled RM3 million to upgrade the infrastructure and facilities at the fishermen’s jetty in Tanjung Piai.

However, the biggest challenge faced by the fishermen are the environmental impacts caused by the mega reclamation projects along coastal Johor. Work to reclaim than 3,000 hectares along the coasts for the development of the Forest City project (photo) and the Tanjung Piai Maritime Industrial Park began five years ago, causing the livelihood of the fishermen to decline dramatically.

Reclamation of coastal land is continuing and mangrove forests are disappearing. Much of the area that was once the sea is now filled with luxury residences and a huge petroleum industrial zone that has been built on man-made land. The local residents are not likely to benefit from these developments.

For the farmers who grow vegetables and fruits, they will not benefit from the Federal Government Paddy Fertiliser Scheme and the Paddy Production Incentive Scheme as they are not paddy farmers.

Tanjung Piai National Park and Pulau Kukup National Park are located 13km away from each other. The two national parks are famous ecotourism destinations in Southern Johor.

Located at the southernmost tip of Peninsular Malaysia and thus the most southern point of mainland Eurasia, the Tanjung Piai National Park used to have a beautiful mangrove forest with fireflies and attracted local and foreign tourists.

However, a huge port and mega reclamation projects were approved for the areas adjacent to the Tanjung Piai National Park, despite the park being listed as a Ramsar Wetlands site.

The development projects have allegedly affected the ecosystem of the coastal environment and indirectly the ecotourism industry.

As to whether the government’s policies are improving lives, the result of the Tanjung Piai by-election is expected to be seen as a clear indicator.