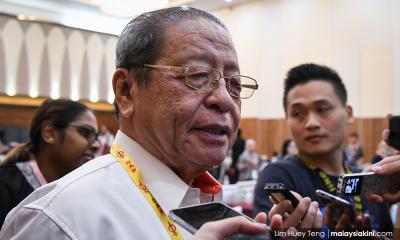 DAP is willing to host a conference on combating fake news and hate speech if the opposition is prepared to attend and is committed to the cause.

Lim's challenge, which was also aimed at Pakatan Harapan parties, was for all political parties to take a united and firm stand against fake news and hate speech calculated to incite inter-racial and inter-religious polarisation, especially on social media.

He said that when DAP was in the opposition for 52 years, the party would support any proposals by the ruling party against hate speech to incite inter-racial and inter-religious polarisation.

"Let us see whether the opposition today, whether at national or state levels, would be equally forthcoming and patriotic to take an united and firm stand against fake news and hate speech calculated to incite inter-racial and inter-religious polarisation in the country.

Lim, who is Iskandar Puteri MP, said there are political parties and politicians who indulge in fake news and hate speech to sow discord even on Malaysia Day.

"A good example was the Malaysia Day speech of PAS president Abdul Hadi Awang, whose first task after celebrating the PAS-Umno alliance of 'klepto-theocracy' last Saturday, was to disseminate fake news and hate speech in Bintulu.

"He accused DAP of being anti-Malay and anti-Islam and that DAP wanted the Chinese to dominate Sarawak and Malaysia," he said.

Lim said that this was simply not true and Hadi had ignored DAP's progress as a multi-racial, multi-cultural and multi-religious movement. He also claimed that none of the opposition parties today can claim the same and challenged critics to prove him wrong.

Another fake news which was being spread of late, said Lim, was allegations that three million Chinese nationals had entered Malaysia when KLIA faced a major computer systems breakdown recently.

"This is an impossibility! This would mean over 10,000 aircraft landing in one day – a fact which could not be hidden from the public," he said.

Lim is currently on a speaking tour in central Sarawak.

According to Borneo Post, Lim spoke at a dinner in Kapit to about 200 people on Friday night where he said issues such as national debt, khat and Islamic preacher Zakir Naik cannot be blamed on the DAP because these were legacy issues from the BN administration.

"We are gradually introducing constitutional and policy changes for good governance. This cannot be done overnight — it must be a gradual process. The ultimate goal is to have good governance, eradicate corruption, look after the interests of all races," he said.