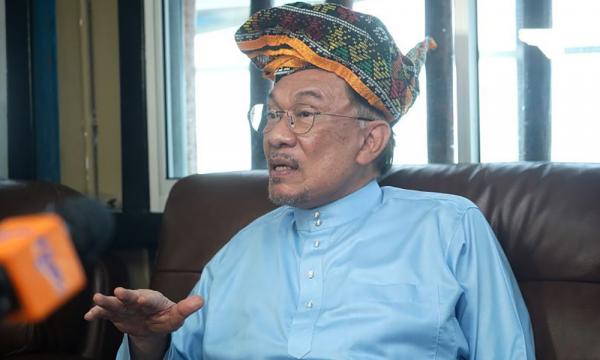 PKR president Anwar Ibrahim has pledged to resolve matters pertaining to the terms of the Malaysia Agreement 1963 (MA63) when he becomes prime minister.

"The committee is for us to discuss the execution of the terms more effectively. This shows that Pakatan Harapan is serious in its commitment, and the people of Sabah and Sarawak understand that we will realise it.

“It is progressing well and when my turn comes to become prime minister, I will ensure it is resolved in the best way possible,” he said.

Anwar said the MA63 was not a minor issue as it had been long delayed but that considerable progress had been made despite claims by the opposition that nothing was being done by the current government.

He said the good news announced by Mahathir at the 2019 Malaysia Day celebration in Kuching, Sarawak yesterday proved the Harapan government was committed to fulfilling the pledges it made in its manifesto in the last general election.

Yesterday, Mahathir said the Harapan government was pursuing its efforts to restore the status of Sabah and Sarawak as partners in the Federation, including resolving several issues as provided for in MA63 including setting up a Special Cabinet Committee to review the implementation of the agreement.

The government had also agreed to fully hand over the administration of Sipadan and Ligitan islands to the Sabah government except in matters of security that remain under the jurisdiction of the Federal government.

Umno-PAS union 'neither surprise nor threat'

In another development, Anwar said the merger of Umno and PAS through the National Charter was not a threat to Harapan, but Harapan's biggest test was to ensure that its leaders in the current administration continue to safeguard the interests of the country’s multiracial citizens.

He said there would be no place for PAS and BN if Harapan remained focused on the interests of its multiracial people through development efforts and providing high-quality education and health facilities besides boosting the country's economic growth and reducing unemployment.

He said the Umno-PAS coalition was nothing new as both parties had previously joined forces and worked together in 1969 before PAS was ousted from the BN in 1978.

"When asked what my views were (about the Umno-PAS coalition), I wish it well. Surprised? Why? If their intention to form a coalition is to bring good, why not. But we must look at it and ask ourselves, what is the basis for the coalition?

“This Umno-PAS coalition is not new, was there any policy change during the previous coalition? No. Did it bring any good to the people? No. This is a new attempt. It is neither a surprise, nor a threat to us. To me, the biggest test still lies with us,” said Anwar.