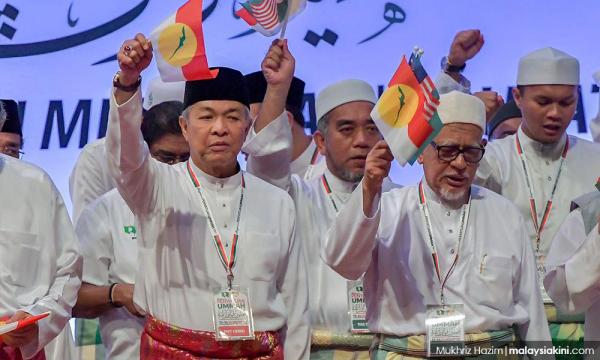 Now, third proof of evil in the Umno-PAS cooperation charter

MP SPEAKS | Now, here is the third proof that the so-called National Cooperation Charter signed by PAS and Umno at the Himpunan Penyatuan Ummah (HPU) at the Umno headquarters in Kuala Lumpur last Saturday is actually a Charter for Fake New and Hate Speech.

This is in the upsurge of fake news and hate speech on the social media exploiting race, religion and the royalty to depict a false picture of DAP as anti-Malay, anti-Islam and anti-royalty (3Rs) within 48 hours of the signing of their charter.

The first proof was the speech by the Umno vice-president Ismail Sabri at the HPU last Saturday, where he perpetrated fake news that Jakim and the halal certification process had been transferred to the Finance Ministry, and declared that non-Muslims are now responsible for the halal certification process - which is his hate speech to create alarm, fear and hate among Muslims.

The second proof was the speech by the PAS president Abdul Hadi Awang in Bintulu, Sarawak, at a Malaysia Day event where he perpetrated the fake news that DAP wanted to give control of the state and its wealth to the Chinese. And in his hate speech to create alarm, fear and hate among Malays and Muslims, Hadi declared that DAP was “the biggest leader” in the Pakatan Harapan government in Putrajaya to ensure that “the wealth for Chinese only, not for all people; other people are left behind”!

The third proof was that within 48 hours of the signing of the so-called National Cooperation Charter by PAS and Umno leaders, there was an upsurge of fake news and hate speech on the social media exploiting the 3Rs to depict a false picture of DAP as anti-Malay, anti-Islam and anti-royalty.

I saw yesterday, viral on the social media among others, a posting portraying me as attacking the Malay rulers – which is completely false and untrue.

I am confident that finally, the truth will triumph over fake news in our country and goodwill, understanding and harmony will win over hate speech.

Who will forget the three colossal fake news and hate speech, which was the core of Najib Abdul Razak’s Umno presidential speech at the December 2016 Umno general assembly, where he declared:

1. The 14th general election will be a contest between Umno and DAP;

2. The DAP is anti-Malay and anti-Islam; and

3. The “nightmares” Malays will suffer if Umno loses power in the next general election.

Who will forget the height of criminal and anti-national irresponsibility to use public funds to produce the film, Tanda Putera, depicting the spurious and fictitious incident of a young Chinese man urinating in front of the Selangor Mentri Besar’s official residence to provoke the May 13, 1969, riots and trying to link the young Chinese man to me, when I was never in Kuala Lumpur during the May 13, 1969, racial riots?

But all these, and many other colossal fake news and hate speech to create fear and feed hatred for the DAP as anti-Malay, anti-Islam and anti-Malay sultans, have failed, or else the historic and miraculous decision of May 9, 2018, would not have occurred.

The new round of fake news and hate speech

But it is clear that the new round of fake news and hate speech is different from the previous attacks – it will be focused on the DAP as the Big Brother in Pakatan Harapan and the Puppet-Master in the government, pulling all the strings on the ministers, including Prime Minister Dr Mahathir Mohamad.

But this new campaign of fake news and hate speech is built on monumental lies – for DAP is not the “Big Brother” or “Puppet-Master” of the Harapan government.

I had anticipated this gambit and this is one of the reasons why I decided not to be in the cabinet.

Mahathir is not my puppet and I am not Mahathir’s stooge – despite two contradictory demonisation campaigns, one painting me as the Puppet Master of the Harapan government (Umno and PAS) and the other depicting me like a puppet on the strings pulled by Mahathir (MCA and Gerakan).

We have beaten the perpetrators of fake news and hate speech once, on May 9, 2018, and there is no reason why we cannot beat them again, even with Hadi (photo, above) replacing Najib in calling the shots in the next 15th general election.

But we are faced with a new medium, the omnipresent social media which conveys information with the speed of light, enabling fake news and hate speech to go viral instantly, unless there is widespread social media literacy in the country, where every Malaysian develops the critical thinking to verify the veracity of what they read on social media.

This is probably one of the greatest challenges of Malaysians today – to be among the top countries in the world in social media literacy where Malaysians do not become victims to fake news and hate speech!

This is something which the Harapan government must give both serious thought and priority.