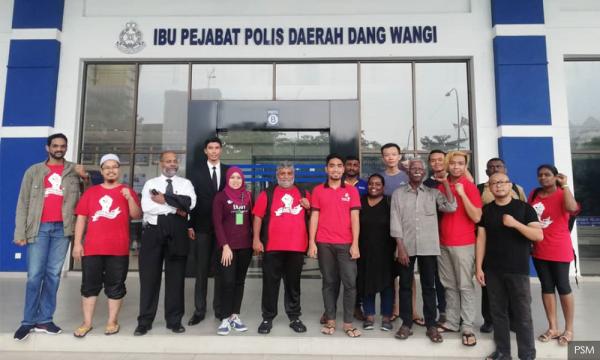 The police have abandoned their attempt to seek a remand to further detain Khalid Ismath and released the PSM activist on police bail.

Police, who arrested Khalid late last night at his home in Klang under the Sedition Act 1948 over his purportedly Twitter postings that were critical of Raja Permaisuri Agong Tunku Azizah Aminah Maimunah Iskandariah, had initially informed Khalid's associates that he would be remanded.

However, the police appeared to have backtracked after facing criticism by NGOs and government MPs who pointed out that there is a moratorium on the Sedition Act, while Tunku Azizah had also stated she disagreed with the actions taken against her critics and was upset by the police crackdown.

"Police will not proceed with their proposal to remand Khalid and will instead record his statement to facilitate the investigation.

"We stress that we are always ready to cooperate and provide statements to the police without the need for arrests which only consume time and police resources," Nik Aziz said in a statement this afternoon.

"We thank the Raja Permaisuri Agong's concerns and prompt response on the issue to diffuse the misunderstanding," he said.

He also thanked friends, NGOs and activists who have stood in solidarity with Khalid through the night.

He also reiterated PSM's position against the Sedition Act and called on the government to expedite its abolition.

This morning, Tunku Azizah had also expressed unhappiness at the arrest of her critics.

"I'm truly upset that police have detained those people. Throughout the years, my husband and I have never made any police report on bad things said about us.

"It's a free country," she had said in a Twitter posting.